From the Movi Menti project

Boys and girls in search of Wonder. A summer camp in Chiavari dedicated to amazement thanks to the Movi-menti project. When we are immersed in something new, be it a laboratory, a game, a trip, our gaze changes. More complex, however, when we remain in the daily routine, in “already seen” … such as our city.
The “City Explorers” summer camp, held in Chiavari for three weeks in July 2022, gave 25 children the opportunity to experience their city with different eyes.
Through observation, education in wonder and awe, media education and philosophical practices for children, we have supported children to “increase their attention to detail”, even if it has already been seen a thousand times. And so for three weeks we found ourselves immersed in a journey that brought us before the wonders of everyday life.

Stefano Aliquò, regional coordinator of the Movi-menti project: “Eyes that dwell on details, steps that follow curiosity, thoughts that act on emotions and generate ideas and dialogue…”

The summer camp “city explorers” was an amazing experience (as reported by the children) consisting of several expeditions, some easy some more complex, but definitely irresistible.
One family postponed the holiday by a day to allow their daughter to attend the last meeting, and each day at the end it was difficult to leave. 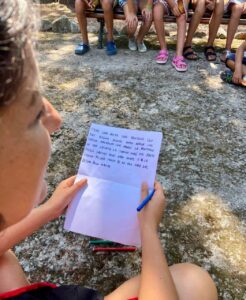 Stefano Aliquò, regional coordinator of the Movi-minds Project: a summer camp for all children who are too curious to stay indoors and for all those who are ready to look at their city with different eyes, the eyes of imagination.

The “City Explorer” was able to tackle three questions related to Chiavari:

· The city to observe: with its physical space, its people and the numerous interactions between them;

· The city that tells: its relationship with the past and its present;

· The city to enjoy: also to be able to taste and experience it among tastes and resources;

There were many specific activities and goals:

· Learn to observe the city, its buildings, its streets and the living beings that populate it and try to imagine stories associated with them through games, collaborative problem solving, P4C and storytelling. 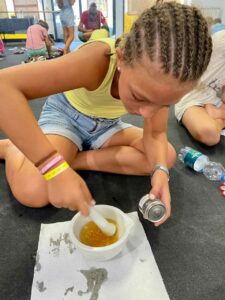 Recognize the architectural elements of the past interacting in the present. Identify Chiavari “upside down” through the position of what were places of archaeological discovery, after a visit to the city museum. Knowing how to identify the route and places of interest on the maps.
Observe passers-by, be fascinated by their clothes and their actions. Bring creativity and imagination to life to tell them from our point of view!
Observe the city’s statues, learn about the history of the characters represented and reinterpret them both through drawing and through exercises in expressive and bodily theatre.
Build a small city model and state some possible city problems. Thinking about possible solutions through collaborative problem solving, coding and robots.
· Observe and investigate the city’s “small inhabitants”. An entomological path to learn not to be picky and discover that insects are useful and able to tell many stories.

Sharing the scents of your life and training the sense of smell, an important sense that is increasingly neglected. Preparation of arnica gel, calendula creams, cough syrup and learning what lies “behind” the work in the pharmacy. Creating labels to learn how to read them.
· The summer camp for young urban researchers was also a chance to share all these experiences with their parents.
The afternoon activities thus gave the families the opportunity to immerse themselves in the experience and gave them the opportunity to open a dialogue with their children, educators and teachers.
Through games and questions, including robotics, coding and phytotherapy, families have discovered the possibility of starting different paths with their children.

Summer camp organized by the Il Sentiero di Arianna cooperative in Chiavari through the Movi-menti project supported by Con i Bambini through the ban on educational poverty.