by Diletta D’Agostini and Ugo Bogotto

Loreto is the home of the family: these were the words that Pope Francis uttered right from the cemetery in the sanctuary on March 25, 2019, when he visited the Holy House as a pilgrim. And it’s great to see the families gathered from all the founders of the Marches right in front of the sanctuary to live their feast, to convey the joy and witness in this X World Meeting of Families the beauty of marriage yes, yes to life, if yes to smile every day lived in spite of the fact that reality often strains the bonds. The families were to be welcomed Monsignor Nazzareno Marconi, Bishop of Macerata and newly elected president of the Marchigiana Bishops’ Conference, who happily embraced those present and shared the beauty of being “normal” families: the families he had in front of him, whom he meets every day in his daily pastoral care, represent genuine concrete and tangible reality of the colored range that is today’s family: not the one made of virtuality, but the one that, even in thousands of difficulties, keeps the boat’s bar straight towards the safe harbor.

Also with Monsignor Nazzareno Monsignor Carlo Bresciani delegated for the family of the dioceses of Marche reminding how this meeting is a sign that unites the pins of the marches in communion with the Holy Father, but that the place chosen for this moment is not accidental. In front of the place that houses the house of the holy family, model for each family, each one invokes his protection. A festive season that touched on three moments: family love, calling and the path of holiness began with the songs about the Renewal of the Spirit, which opened the meeting and provided the starting point for prayer, reflection and invocation to Christ, to continue with a series of testimonies of concrete lived realities. 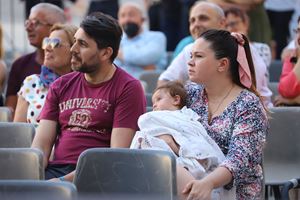 And what united the Holy House with St. Peter’s Square? The joy of connecting live with the regional delegates present at Pope Francis’ Mass: an immense joy to see the families and children eagerly awaiting the Holy Father, and who showed the many gathered in Loreto Square in St. the feast of life. In Loreto, among many others, we received the testimony of a young couple who had been married for only 15 days: their wedding pictures floating on the screens brought back a memory that was still very vivid for them about that ceremony, but which also reminded the many spouses who have spent many springs, the day of their yes and with it also the many winters which are sometimes difficult to overcome, but after which they have always found the flower of new life. And from the couple Yes in a few weeks to the couple who would laugh again Yes a step away from separation: Yes, for a family’s difficulties are not read in the newspapers, they are not in the town square, they are in a house secret, in tears hidden of two spouses who no longer know what to say to each other and only see the end … And The retrouvaille path also saved this marriage, recreate both the joy of finding each other and never getting lost. There are many other testimonies: from the Fano Counseling Center, to the young seminarians, to many other married couples, but one beautiful thing that has remained impressed is the joy of the newlyweds who remembered their grandparents as a spectacular love, not made of fireworks , but consists of one yes after another, a yes that is pronounced every day: the grandparents that Pope Francis reminds us to cherish, listen to, and appreciate because they are our history and our being today. The joy of calling was applauded by two new ordinances it of from Francesco and that of don Lorenzo.

The conclusion was entrusted to the prayer of the Holy Father, which was conceived for this world day, read by two couples along with the audience of families present. Monsignor Fabio Dal Cin, Prelate Archbishop of Loreto and Papal Delegate, dismissed those present with an applause to the Hostess, Maria, and hoped that her blessing could reach all homes in the Marche and all homes in the world. “The message that comes from Loreto,” the Archbishop recalled, “is that we are all called to create a home and to create a family” not only in the home, but in all places where the Lord calls us to perform his plan for us. “Let’s learn to tell each other about life,” are the words of Laura, who, along with her husband Gabriele, is in charge of the family’s pastoral care in Marches.