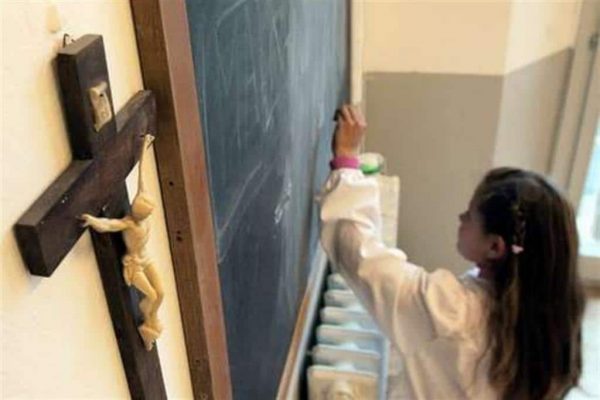 No visits to the paintings del Duomo because they chose to not attend the hour of religion. This is what happened five boys and girls of a primary school of San Donà di Piave, Venicewho during the school trip, on May 20 last year, had to content themselves with staying outside the cathedral and waiting for their companions and teachers to finish admiring the works inside.

Those who do not attend the religious lesson in class have not even ‘fit’ for the visit, during the tour, inside the Cathedral of San Donà and the mosaics made by Father Marko Rupnik. To report the incident, two mothers of just as many girls are excluded from the trip due to their ‘lack’. When the two school groups, fourth and fifth grade, were to enter the sacred building, it was exempt students from the hour of religion was asked to wait outside the church, while the companions began to visit mosaics. The five children then ‘sat’ on the outside stairs and waited patiently for the end of the visit, alternately supervised by a teacher while the two classes took turns inside the cathedral. “My daughter got some crossword puzzles as a pastimeSaid one of the two mothers. The woman reported that the school coordinator “justified himself on the phone by claiming it the mosaics represent scenes of the Eucharist and therefore she has decided, together with the other teachers, to exclude all children who do not attend the religion class ”. And who cares about the artistic value of the works themselves, the crucial thing is that students who do not follow religion are not ‘affected’ by seeing a sacred scene.

Currently, religion time in school is regulated by Agreement between the Italian State and the Catholic Church from 1929, updated in the second half of the 1980s – especially with regard to secularism – and stipulates that in all Italian schools optional weekly lessons and no longer mandatory for teaching the Christian religion. The choice to follow these lessons is announced at the beginning of the study cycle and can be freely changed by registering for the school years after the first. The teaching of religion is present in almost all European countries (with the exception of France, the Czech Republic, Slovenia and Albania) with different modalities and content.

Remaining in our country, this school ‘subject’ represents one very sensitive subject because it can create division among the students in the classroom as our society has evolved (becomes much more diverse) while the teaching has always remained the same. As it is an optional class, it is offered exemption for those who do not intend to follow it because they profess other faiths or simply because they are not interested, who, however, should have the right to an alternative. However, it is still difficult to implement effectively, often due to a lack of funds and resources on the part of schools. So for the atheists, Jews, Muslims, evangelists, Waldenses and so on students, there is only left to continue to protest against what is really a missed school lesson. There are even those who consider it a kind extension of catechismand he is not entirely mistaken: in the Italian school system there is one still confessional teaching, despite having undergone changes but not significant ones. But from here, to exclude the students who have exercised their right to vote from visiting a very important church of not only religious but also artistic value, water goes under the bridges. Especially when it happens in school, in the institution it must train for integration and certainly not for marginalization.