This year the first African anticyclone it appeared in May, removing the faint hope of a rainy spring that would have alleviated one of the worst Drought of the last decades. A few days of respite, at the Center only a few, then a new anticyclone has returned, which causes temperatures to jump to 35 degrees throughout Italy. This summer is likely to go the way that weeks of blistering heat alternate from temporally which brings a little cool for a while. It is likely that this will increasingly be the case over the next few years. Prolonged flaming heat is not a random meteorological fact, but a tendency destined to become chronic, or worse, to worsen.

But worse than the scorching heat, there is only one thing: do not mention it. We experience 35 degrees in June as something to be accepted in silence, to be endured, and each doing the best he can. Our rivers are dry, even the richest water bodies in Italy, such as Val d’Aosta, are in water crisis and we are still early summer. This is a total emergency that should be treated as such. It must be at the center of the public debate, it must be the opening of all news and talk shows. Where we instead talk about something else. For example, for days and days on the Copasir list of Putinians in Italy. A thing very seriousfor heaven’s sake, but never like the climate crisis before our eyes.

Warm alarm for five cities, maximum level of heat with peaks up to 40 °

The climate crisis is taboo due to scares. We are afraid to talk about what so many profound ecologists have pointed out because we fear our desperation will come out. So on the one hand we continue as if nothing had happened, on the other hand we know that our way of life will soon end. It is a disturbing situation. But the less we talk about it, the more the anxiety becomes. And in this, I repeat, our media are absolutely guilty, as is much of politics. Minister Cingolani has failed in its task, which at least should have been to put the climate issue at the center of the political agenda. Forcing Draghi and the ministers to deal with it, imposing drastic measures, at the same time addressing the citizens to encourage them but groping at the same time to reassure them. None of this, on the contrary: Cingolani continues to say to himself concerned of the environmentally oriented ideology, about electric cars and about renewable energy. Disappointing.

So when do we start talking about the problem of unsustainable temperatures? How much longer can we go on without putting the topic on the plate, to at least talk about it would allow us to release emotions blocked by terror, and finally be able to represent the beginning of a public discussion where one can express one’s fears and then move on to the Act? By bringing out the pain and discomfort we feel, all people are now aware of the emergency, except mainstream journalists and many politicians, one step further. basic, much more than dancing and singing for the environment, much more than celebrating the environment, as some major newspapers have recently done (only to defend their interests even to the detriment of the environment on machines and more). Here is the time to say it we fear for our livesbecause a heat like this is abnormal, worrying and destined to get worse. 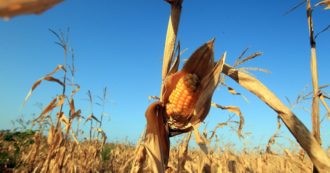 Extreme heat, the African anticyclone is coming: temperatures up to 39 ° are expected. Coldiretti: “There will be drought alarms in the countryside”

Expressing fear then means start acting. For example, one of the most urgent things on the adaptation front will be to completely rethink our cities. It is discussed too much, without immediate solutions. It seems to me that today’s debates, in any case, are already delayed on events. For example, we are talking about replanting town – which for heaven’s sake is fine if it was done and above all good, for no new trees can be planted and then left to dry, as has happened several times in Rome. And if they are planted in parks, they do not cast shadows on the roads. But here we must take a leap Besides. It is now so hot in the city that we should start thinking about common public structures indoors. As in the Arab countries. Sad, but true. Parks, but also fields and playgrounds, covered, ventilated. In short, public spaces that can also be accessible to those who do not have air conditioning, to those who live in the suburbs, to poor children who live in red-hot apartments.

Those who can condition their apartment and go back and forth with the countryside, the sea, the mountains. But who stays in town in the summer? There is a very urgent need to rethink public space in light of the fact that we will no longer, probably never again, have cool summers. So what do we want to do? Send the elderly in supermarkets, as Berlusconi said? The recession caused by the war, rising inflation, will prevent many families from going on holiday. These families must be able to survive even in temperatures burning. We should also think about creating summer centers for middle-class children who are in sheltered places, if not at least equipped with a swimming pool. Who is dealing with this in the Folketing? Who says the issue of heat waves and summers with unbearable temperatures is the first of the emergencies that need to be addressed both in terms of mitigation – of course – and adaptation? Is it possible that journalists and politicians do not have a bit of imagination to understand how much suffering the heat can inflict on fragile people like children and the elderly? And if it does not serve to protect the vulnerable, then what is politics for?