Until June 12 in connection with the 60th edition of Furniture exhibition, the most important works will be exhibited at Sotheby’s Ion Corso Venezia 16 together with the exhibition of the British designer Tom Dixon entitled ‘TWENTY’ and dedicated to the 20 years of his activity. The goal of the Milanese section of the maison is to celebrate the influence of Italian architects and designers on the history of design in the 20th and 21st centuries.

In the catalog a group of furniture, created and selected by the Milanese designer-architect Osvaldo Borsani for a private residence between 1949 and 1950. The ensemble of these works highlights not only the ingenuity, the extreme attention to detail and the quality of his production, but also Borsani’s collaborations with his contemporaries, i.a. Lucio Fontana and Agenore Fabbri, which he counts among his closest collaborators. One example of these collaborations is a blue and gold-painted ceramic by Lucio Fontana, adapted for lighting.

Among the offered parties are Mobile bar by Borsani conceived as a subdivision unit, with triple opening, mirror interior and gold leaf details, using counterweight mechanisms for which bicycle chains have been adopted (estimated at 12,000-18,000 euros). The bar’s elegant shape and soft curves also define the 1950s ideal of the home as a place of social representation. large oval table, also by Borsani, surpassed by a Candoglia marble – the same pink marble from the Cathedral of Milan – with high quality marble maple leaf inserts (estimated: 10,000-15,000 euros). The designer is also present at the auction with some armchairs It is a game table with a marble top adorned with inlaid illustrations, each symbolizing a game, such as chess, cards and dominoes (estimated: 5,000-7,000 euros). 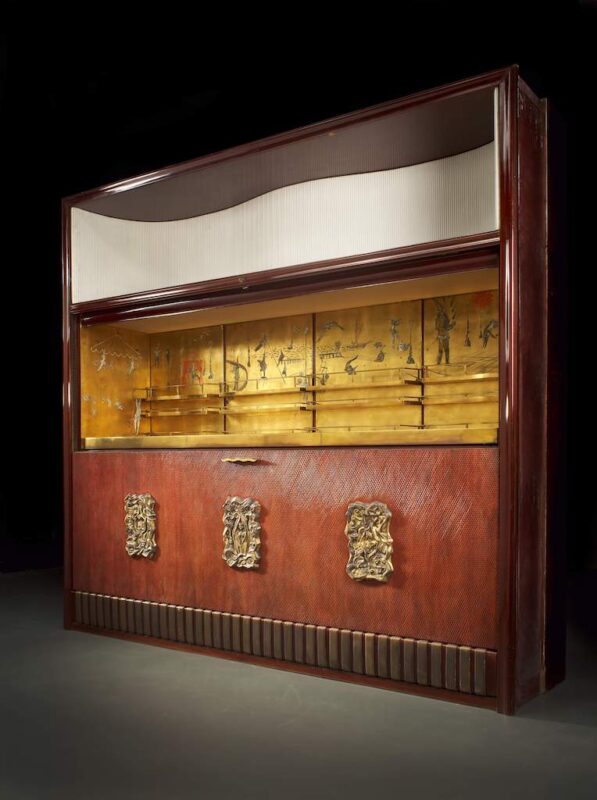 The auction follows us throughout the twentieth century: from the works made by the rationalists Piero Bottoni, Giuseppe Pagano and Gino Levi Montalcini in the 1920s-40s, to the works of postmodern architects Ettore Sottsass and Gaetano Pescepassing through the great designers of the second post-war period such as Gio Ponti, Gino Sarfatti, Ico Parisi, Max Ingrand and Ignazio Gardella.

Elena Checchi (Sotheby’s 20th Century Design Specialist) commented: “The auctions of Design from Sotheby’s present to collectors from all over the world the best production of this century and the last. Season after season, we have seen a growing interest from our customers for the iconic works of Italian and international designers. With great enthusiasm we present our first design auction in Milan, with pieces by some of the greatest Italian designers, combined with a group of works designed or selected by Osvaldo Borsani between 1949-1950 – a committee that undoubtedly highlights the enthusiasm of the post-war period and the explosive creativity that characterized Italy through the decade.