Following the recent inauguration (approximately 15 days ago) of the exhibition dedicated to the artist from Terzigno (NA) Salvatore Emblema, the large monographic exhibition on Battistello Caracciolo this morning, June 9, was also inaugurated in the Sala Causa at the Capodimonte Museum.

The cultural ferment that animates the precious spaces of the Capodimonte Museum does not stop giving visitors increasingly beautiful and interesting exhibits like this one, which was inaugurated this morning and shown to the press. Decorated in the Causa room, I speak of the great monographic exhibition of Battistello Caracciolo, a refined artist (Naples, 1578-1635), who more than others embodied Caravaggio’s teachings, to the point where he achieved the definition of “bronze patriarch”. of the Caravaggeschi “by art historian and critic Roberto Longhi.

The exhibition, curated by Stefano Causa and Patrizia Piscitello, was born from the idea of ​​Sylvain Bellenger, director of the museum and Real Bosco di Capodimonte, with the institutional collaboration of Mario Epifani, director of the Royal Palace of Naples and Marta Ragozzino, director of Campania regional museums. In these two other places, there are works by Battistello in an exhibition route linked to the Capodimonte exhibition, also through a joint ticket sale for the entire duration of the exhibition until 2 October 2022.

About 80 works exhibited in the Causa space, many of which come from public institutions, Italian and foreign, ecclesiastical bodies and private collectors. The exhibition also continues in two other important places, the first at the Royal Palace, where it will be possible to visit the hall of Great Captainwhose

Vault was frescoed by Battistello Caracciolo with stories of the first viceroy of Naples, Gonzalo Fernández de Córdoba known as the great captain, moreover, visitors will be able to recognize, among the figures represented in the box with the scene 𝘊𝘰 中 𝘳𝘥𝘰𝘣𝘢 𝘤𝘰𝘯 𝘨𝘭𝘪 𝘢𝘮𝘣𝘢𝘴𝘤𝘪𝘢𝘵𝘰𝘳𝘪 𝘥𝘪 𝘕𝘢𝘱𝘰𝘭𝘪 𝘤𝘩𝘦 𝘨𝘭𝘪 𝘰𝘧𝘧𝘳𝘰𝘯𝘰 𝘭𝘦 𝘤𝘩𝘪𝘢𝘷𝘪 𝘤𝘪𝘵𝘵𝘢̀ 𝘤𝘪𝘵𝘵𝘢̀, the portrait of Michelangelo Merisi da Caravaggio, of which the Neapolitan painter was one of the first adherents, the other instead of the majestic Certosa and San Martino Museum, where the exhibition itinerary winds through the chapels of Assunta, San Gennaro, San Martino and the church choir, as well as the premises dedicated to Battistello in the gallery of the Fourth of the Prior.

This exhibition is part of a program of precious exhibitions that the museum and Real Bosco di Capodimonte carry about Neapolitan and non-Neapolitan artists, who, however, have had a close relationship with the city of Naples, albeit fleetingly, as in the case of Picasso and recently Jan Fabre or Santiago Calatrava, and who have seen their work influenced by something else or even take a new path, from the Neapolitan experience. After Luca Giordano, Vincenzo Gemito and Salvatore Emblema, three very different artists, today is the turn to Battistello Caracciolomonographic exhibitions, which are often the first ever realized about these artists, and contribute to a better identification, if not really of the school, at least of the Neapolitan environment, very complex and which obviously can not only be understood by strictly philological exhibitions. often hiding the complexity of a metropolis open to the world like Naples.

Therefore, and not surprisingly, each specific exhibition is influenced by those who preceded it, for what its subject taught us, but also by the art of exhibiting, telling, and above all about the receptivity of the public. We have a striking example of this with the exhibition In addition to Caravaggio. A new tale of painting in Naplescurated by Stefano Causa and Patrizia Piscitello, inaugurated on March 31, which certainly also influenced the exhibition on Battistello Caracciolo, suggesting the introduction of elements of comparison with sculpture, an aspect so important that director Bellenger wanted all costs to be included in the exhibition catalog, which for that reason has not yet been printed.

Born in Naples in 1578, where he died in 1635, Giovan Battista Caracciolo known as Battistello is the first and greatest of the southern so-called Caravaggesque painters, but during his life as an artist we can define him as an “unclean”, a infidel because, unlike the master, he draws, frescoes and engraves. The painter was rediscovered with a famous article from 1915 in two sections in the magazine l’Arte by the young Roberto Longhi (1890-1970). 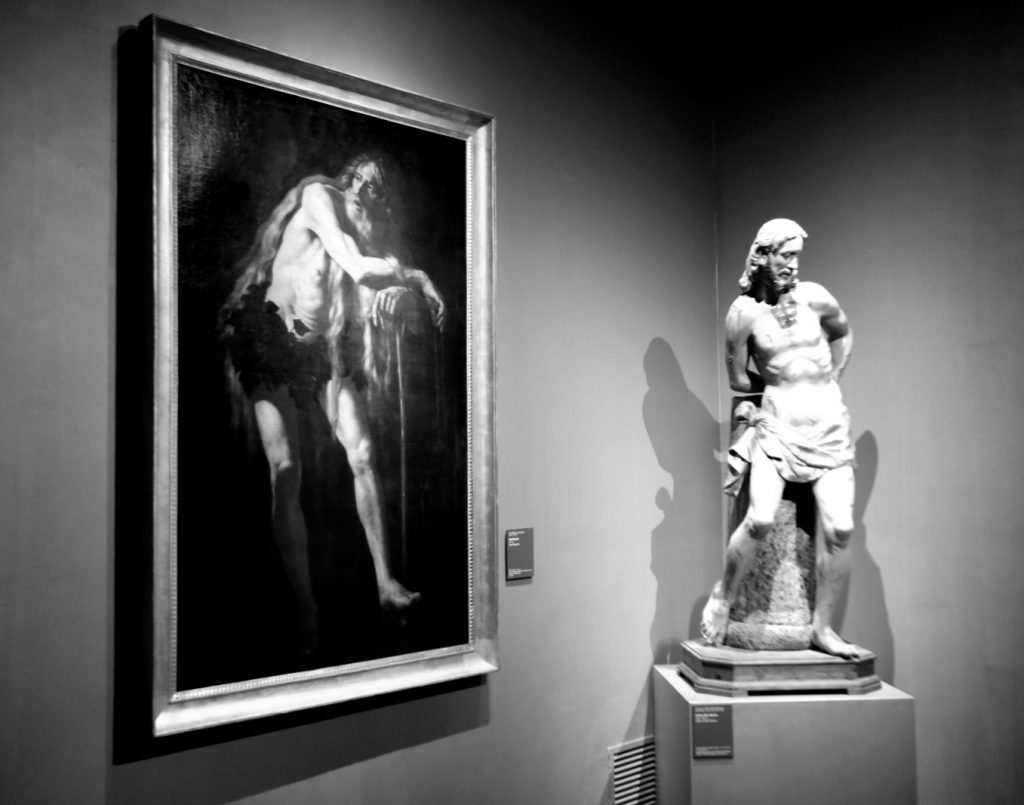 The author and art historian of Piedmontese origin will never deny the passion of the painter whom he for his collection of Caravaggesque paintings managed to achieve a work like the powerful one. Burial of Christ – exhibited in the exhibition (Florence, Longhi Foundation). Some of the most demanding works from Caracciolo’s last days, in the 1630s, are among the masterpieces of mural painting in southern Italy. Battistello was actually trained as a fresco between the end of the fifteenth century and the beginning of the sixteenth century, and as a fresco he completed with the help of a workshop his journey in some of the great churches in town.

Important contributions from the Giuseppe and Margaret De Vito Foundation for the History of Modern Art in Naples di Vaglia (Florence), from the Roberto Longhi Foundation for the History of Art History in Florence and from the Michele Gargiulo Collection. Fundamental to the exhibition are the loans from ecclesiastical bodies: the Collegiate Church of S. Maria di Ognissanti in Stilo (Reggio Calabria), the Church of the Nativity of the Blessed Virgin Mary (Salerno), the Diocesan Museum of Cremona, the Church of San Michele Arcangelo di Baranello (Campobasso), the Cathedral of Santa Maria Assunta at the Cathedral of Naples, the Deputation of the Royal Chapel of the Treasure of San Gennaro in the Duomo, the Chapel of the Treasure of San Gennaro, the Archbishop’s Curia of Naples, the Church of Santa Maria in Constantinople, the Church of Santa Maria Incoronatella della Pietà dei Turchini, the Church of Gesù Vecchio, Church of Santa Maria della Stella, owned by the Ministry of the Interior – Fondo Buildings of Worship, Augustissima Archconfraternity and Hospitals of the SS. Trinità dei Pellegrini e Convalescenti, basilikaen Incoronata Madre del Buon Consiglio. We thank Nucleo Carabinieri for the protection of the cultural heritage of Naples and all the private collectors.

20 euro cumulative ticket to the Museum and Real Bosco di Capodimonte, the Royal Palace of Naples and Certosa and the Museum of San Martino, valid for one entrance to each exhibition venue for the duration of the exhibition, which can be purchased online or in place at each of the three locations the relevant ticket offices

Only ticket to the Royal Palace of Naples

Warning: from 13 to 22 June, the historic apartment will be closed to the public to allow safe construction of two important institutional events.