On 19 and 20 May, the national URBACT NPTI network, coordinated by the ANCI, reached Avellino as a national point in the program, reiterating the experience of involving the arts and culture world in the fight against climate change, originally developed by Manchester and in turn replicated from Mantua with the C-Change network.

The national URBACT network, which focuses on adapting and transferring Mantua’s good practices, promotes the active participation of some of the most dynamic sectors active in Italian urban contexts, in order to promote greater awareness of environmental challenges at local level.

The cities of Avellino, Rovereto, Cuneo, Sestri Levante, Siena, Ferrara and Corigliano-Rossano met on “how to meet climatic and environmental challenges by organizing sustainable cultural events at local levelAt the meeting, the cities in the network were involved in a practical exercise on the different types of challenges and barriers to be overcome in a sustainable and participatory planning of cultural events at the local level. 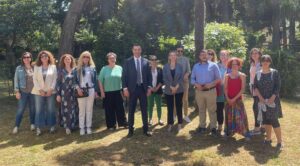 Participants were welcomed by the Mayor of Avellino, Gianluca Festa, who spoke about the activities carried out in the city and said: “Before participating in a tender, let’s try to understand whether it is useful to the local community, and whether it responds to the strategy and project of cities that we want to create.We wanted to test ourselves and we decided to participate in the Urbact call focusing on eco-sustainability, culture and tourism.A brave challenge that has rewarded During the various activities of the project, we confronted ourselves with other local realities, learned a lot, but also illustrated what we have achieved in our city.We have created a network that will allow us to develop further synergies and collaborations with others projects that are useful in making our territory and our history known. We thank Anci for this opportunity for exchange and discussion “.

“Focusing on sustainable urban development through the area’s artistic treasures involving the local community, especially the younger ones – added Festa – is the common thread in the initiatives implemented in Avellino. Start-ups and local associations are committed to combining art, culture and sustainability. to spread green behavior through, for example, the recovery of old knowledge and old craftsmanship.A project that makes sustainability the engine to combat the depopulation of Irpinia by focusing on new forms of green urban economy capable of giving voice and involve the energies of the territory.

Then there is room for a traveling theater performance, by the theater companyClan Hin the park Villa Amendola on the themes of eco-sustainability and a study visit, organized by the municipality with the association Heraionto discover the most significant sites in Avellino, also meet business representatives (After Plastic, SEI Incubator, Hope, Famevo, Chiaroscuro artlab, Ingenium srl) engaged in the challenge of making the Irpinia area greener and local actors active in ULG, Local Group Urbact, coordinated by the European Strategic Service and consists of local associations from the world of culture, society and the environment.

The meeting in Avellino of the URBACT NPTI national network coincided with kick off by URBACT GREEN FEST, the first festival dedicated to culture, environment and sustainability in the city of Avellino. Three days, May 19-21, with events and workshops to raise awareness of the project’s themes and the importance of green behavior: “The Stories in the Villa: Reading and Theater Workshop ”by L’Angolo delle Storie and Puck TeaTré in collaboration with Intra Cooperativa and Don Tonino Bello Odv; “We Know the Hidden Garden” by Pro Loco Avellino in collaboration with agronomist Ferdinando Zaccaria; “Alveare” with Legambiente Avellino; “Film screening of the documentary (In) Felix by Maria Di Razza” by ZiaLidiaSocialClub, “Café Philo”, laboratory for philosophical practice in the Amica Sofia Association.

During the planned activities for the URBACT GREEN FEST there was also a presentation of the book by Simone d’Antonio and Paolo Testa from ANCI “Cities are the solution“Telling the stories of urban innovation from Urbact and the UIA network, as part of the debate with the various professional associations, coordinated by Councilor Emma Buondonno,” Urban renewal between ecological and digital transition. First meeting in the city center of the city of Avellino “.

“Great success and participation – concludes the Mayor of Avellino, Gianluca Festa – both for the stop in Avellino of the national URBACT NPTI network and for the first URBACT GREEN FEST, which is definitely to be replicated and strengthened, including new local players in ULG Next step in the municipal administration will be a document that regulates the organization of events, based on eco-sustainability and plastic-free to sensitize communities to respect and protect the environment, spread a green and green culture that is fundamental in contrast to climate change in our cities “.