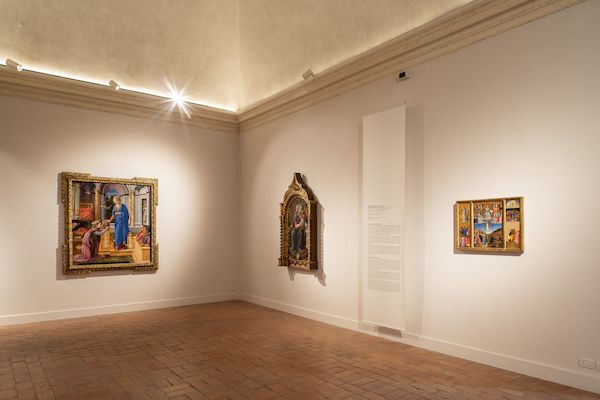 INFORMATION:
www.barberinicorsini.org | gan-aar.comunicazione@beniculturali.it
EVENT: From primitives to Filippo Lippi: Palazzo Barberini’s new layout
CURATORS: Flaminia Gennari Santori with Maurizia Cicconi and Michele Di Monte
PLACE: Rome, Palazzo Barberini, via delle Quattro Fontane, 13
OPEN TO THE PUBLIC: from 29 April 2022
HOURS: Tuesday – Sunday, 10.00 – 18.00. Last access at 17.00.
BARBERINI CORSINI TICKET: Full € 12 – Reduced € 2 (children aged 18 to 25). The ticket is valid for 20 days from the time of stamping for a single access to each of the museum’s sites: Palazzo Barberini and Galleria Corsini.
From April 15 to September 25, 2022, to coincide with the Disney show. The art of telling timeless stories, produced by Sole24 ore Cultura and host of the Palazzo Barberini exhibition area, there is a reduced rate of 6 euros for National Galleries, Palazzo Barberini and Galleria Corsini. To take advantage of the discount, the visitor must show the ticket to the Disney show at the ticket offices at the two locations. The campaign only entitles you to one access per venue.
Free: children under 18, school groups and accompanying teachers from the EU (by reservation), students and teachers in architecture, literature (archaeological or historical-artistic address), preservation of cultural heritage and educational science, art academies, employees of the Ministry of Culture, ICOM members, tour guides and interpreters on duty, journalists with booking cards, disabled people with companions, school teachers, permanent or temporary contracts, on presentation of an appropriate certificate according to the model prepared by Miur.

ACCESS RULES:
Access is regulated in accordance with the infection prevention rules laid down in the law. To access it is necessary to use the mask.
Reservations required on weekends and holidays at the link: https://www.ticketone.it/city/roma-216/venue/palazzo-barberini-16406/
Or by contacting the number: 06-32810
GROUP VISITS: groups of up to 15 people, guide included, with reservation required on 06-32810 both on weekdays and on public holidays and weekends. Use of radio systems mandatory.
To ensure the easiest use for all, the maximum stay for groups at the museum is 2 hours.