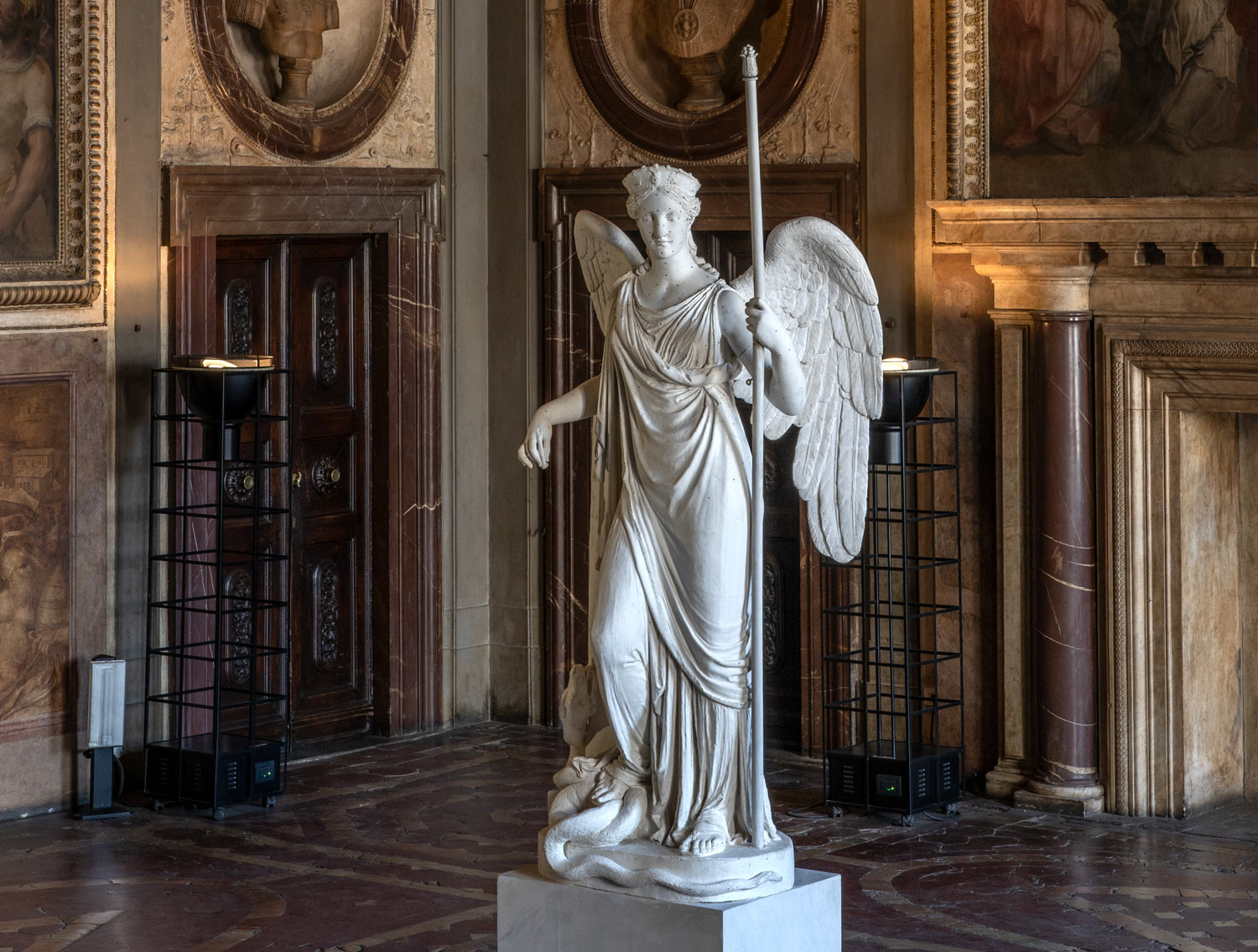 From 11 May to 18 September, the plaster for the Peace of Kiev will be exhibited by Antonio Canova at the Salone dei Cinquecento in the Palazzo Vecchio in Florence, the sculpture preserved in the Khanenko Museum in the Ukrainian capital. The plaster is on loan from the Gypsotheca Museum in Possagno.

As of today, May 11, the cast is off Peacethe masterpiece of Antonio Canova (Possagno, 1757 – Venice, 1822) kept at the Khanenko Museum in Kiev and now hidden to prevent damage during war between Russia and Ukraineis exposed to Florenceto Palazzo Vecchioin Hall of the sixteenth century. The exhibition aims to be a means of ensuring the contemplation of the sculptor’s masterpiece, otherwise denied by the conflict. In addition, the work is exhibited in the Salon at the same time as the same environment sees the presence of Fourth Stand by Giuseppe Pellizza da Volpedo. The plaster of peace in Kiev remains in Florence until 18 September.

The exhibition, curated by Vittorio Sgarbi, created thanks to the collaboration between Museo Novecento and Gypsotheca Antonio Canova Museum of Possagno, organized by MUS.E with Contemplazioni, sees the sculpture installed in the center of Sala di Leone X in Palazzo Vecchio. This scenario, in which the frescoes depict the stages of the takeover of Giovanni de ‘Medici, son of Lorenzo the Magnificent, who became pope named Leo X, counteracts the message that Canova’s sculpture carries on, which tells with its story events of wars and peace. In this context, there is also the image of Cosimo I de ‘Medici in the form of Mars, an obvious symbol of the Duke’s rule and his expansionist policies.

Nikolai Petrovič Rumyancev (St. Petersburg, 1754 – 1826) is a Russian politician and diplomat, also mentioned by Lev Tolstoy in War and peace. Despite a military career behind him, he is a pacifist, pro-French, an admirer of Napoleon, a lover of Europe, for whom he traveled from 1774 to 1776 (also in Italy), where he studies and meets personalities of Voltaire’s caliber. . In 1811, Rumyancev commissioned Canova to produce white marble to be placed in the hall of his palace in St. Petersburg. The sculpture was to pay tribute to the peace treaties that had ended three wars and which the Rumjancev family had helped to sign: the peace in Turku in 1743 (which ended the war with Sweden), the peace in Küçük Kaynarca in 1774 (with the Ottoman Empire), and finally the peace in Hamina in 1809 (again with Sweden). From 1808 to 1814, Rumyancev was Foreign Minister and maintained friendly relations with Napoleon Bonaparte. However, he threatens Russia, and when he invades it, the Russian politician gets a stroke, which caused him to have a hearing loss. Rumyancev got it done with a great admiration for Napoleon. And Napoleon attacked Russia.

Canova was commissioned to carry out the work at the beginning of Napoleon’s invasion of Russia, so much so that the sculptor himself wrote to the Quatremère de Quincy on February 11, 1812: “The statue of peace will be built: war will come; it will not be able to prevent it. But I fear that there will be no statue of general peace for now. So it could be done as I would raise it at my expense! ”. On the death of Nikolai Petrovič Rumyancev, his collection was donated to the state, and in 1831 he established the first Russian public museum, first in St. Petersburg. Petersburg, then in 1861 transferred to Moscow. Krušëv, secretary of the Communist Party of the Soviet Union, of Ukrainian origin, decided in 1953 to transfer the sculpture from St. Petersburg. Petersburg to Kiev, to the Khanenko National Museum. Here it is almost forgotten: Ukraine rediscovers the great value of the work almost twenty years ago, then Irina Artemieva, curator of Venetian art at the Hermitage Museum, finds a correspondence, preserved in the manuscript section of the National Library of Russia in Skt. Petersburg, between Antonio Canova and the Ambassador of Vienna, who had acted as an intermediary for the Commission. The rediscovery of the correspondence made it possible to reconstruct the history and events associated with the construction of the work.

The iconography of peace is reminiscent of Nemesis, Greek goddess of “justice distribution”. The snake is reminiscent of the Roman medals, where it was a symbol of war. The fact that the memoirs are in Latin is the result of a negotiation between Canova and the Ambassador of Vienna: the original hypothesis of the Russian language was set aside in favor of Latin, the lingua franca and the symbol of the union of European nations. to reinforce the message of peace at work.

“This sculpture,” comments Vittorio Sgarbi, “embodies a series of formidable intrigues from the past and present. There is a peacemaker who prays for peace for himself, and prays for it, thinking of Napoleon, but as he prays for it, Napoleon to the gates of Russia. War brings only evil and violence on all sides, both for those who exercise it first and for those who exercise it as a reaction. So it is very sad to think that something also happens against works of art as well as against people.Peace in Kiev is now on display in Florence, and here peacetime awaits.Canova, the last great artist to close Western art, has united everything he has not shared.Canova is a great mediator for any conflict , by any difference, and in the name of his peace, I ask you to invoke it all on the spirit level of the world so that the world may be saved.I have never fully believed Dostoevsky’s phrase: ‘beauty will save the world’: we can not say, that beauty saves the world whose worth one does not save beauty, for the love of humanity and civilization that art testifies to. “

“Art and culture will win over violence and the abomination of war,” he emphasizes Dario Nardella, Mayor of Florence. “In these turbulent times, we welcome a very symbolic work to the Palazzo Vecchio. The peace of Kiev, now hidden due to the war, and who knows how long it is still inaccessible, is evoked with its only copy that exists in Leo X’s It makes us reflect on the extreme material fragility of the art in front of us, on the destructive forces, but also on the power of the same that becomes form, me moria, a message of peace of unusual courage. .

“A few days after the presentation of the fourth estate of Pellizza da Volpedo, another masterpiece of Italian art enters the Palazzo Vecchio, the model of the so-called Peace of Kiev cast in plaster by Antonio Canova,” declares Sergio Risaliti, director of the Museo Novecento in Florence. “Here, past, present and future meet and cross, and art takes on the task of representing the fate of humanity. Amazing how works by two artists of such different, if not antithetical, culture and style can immerse themselves in the present and recreate themselves in our eyes. Evidence that great masterpieces go beyond their own era, even when they arise from the news, because they become advocates of universal values. When we go in front of the fourth state, pausing to admire the classic forms of peace, it is instantaneous to remember two basic principles of our Constitution. The first to put work at the center and the eleventh to reject war. It is not obvious that art e becomes an advocate in such a sublime and engaging way in our eyes and in our soul for similar ideals and values. When this happens, we recognize in the works of the great artists of rescue anchors as well as warnings to act for the benefit of man and the progress of civilization. When we look at the immaculate white forms of peace in Kiev, we can not help but think of the blood flowing in Ukraine, the drama of refugees, the horrors perpetuated among civilians. And we can not help but think of the fate of many artistic masterpieces that are at stake by the destructive rage of the armies. Canova’s Peace demands that we make sense of beauty and make ourselves bearers of brotherhood and solidarity between people and individuals “.

In the photo, plaster of peace in Kiev, Florence. Photo by Alessandra Cinquemani

If you liked this article or found it interesting,
Sign up for our free newsletter!
No spam, just one Sunday issue plus any extras to keep you updated on all our news!

Your weekly reading about the whole art world