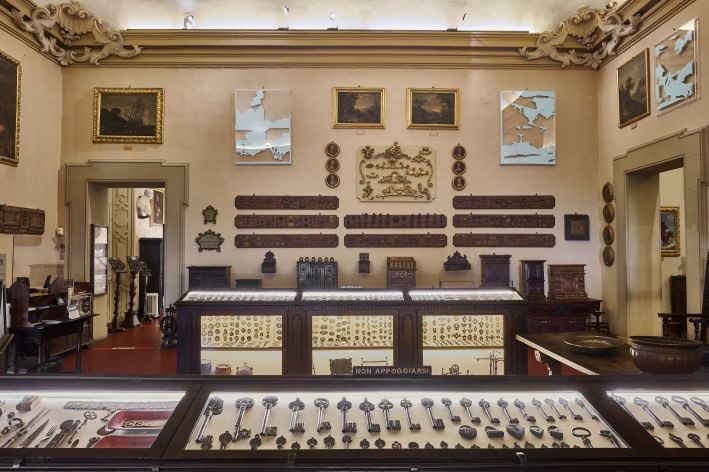 NOS Visual art production presents FRESHthe first solo exhibition of Davide D’Elia in Bologna, at Davia Bargellini Museumedited by Elisa Del Prete and in collaboration with Bologna Museumsinstitution | Citizens’ museums for ancient art In the context of ART CITY Bologna 2022on the occasion of Arte Fiera.
The inauguration takes place Friday, May 13th on 17.30with free admission.

The intervention is designed in dialogue with the museum’s collection and the distinctive museographic criteria that dictate the exhibition journey inside the 17th century building where it is located, a rare example of private collection. The exhibition consists of eight plexiglass paintings from the cycle FRESH made during a previous operation site specific made by D’Elia in 2018 on the frescoes at the Salone delle Feste del Atti-Pensi Palace in Todia sixteenth-century residence that stands at the center of the Umbrian city’s main square, set up in Bologna in relation to the paintings and sculptures commissioned by Bargellini’s patronage, among the Bolognese families who held important positions in the city’s senate. .

The artist has for some time explored the relationship between past and present, art history and contemporary art, academic painting and pictorial “gestures”, in a way that focuses on a rethinking shape and color in a contemporary way.
To perform the cycle FRESH in Todi, the artist did not directly intervene in the frescoes, but put specially designed plexiglass structures on them. This allows him to apply “iris blue” paint fields, sometimes hiding the organic elements of the landscape, sometimes the architectures to bring out the construction of the paintings of the underlying frescoes. Once the eight paintings have been removed from the frescoes, they have become abstract paintings – or “absolutely” as the artist defines them – on which the trace of the compositional study is preserved, creating a discourse between “absent painting” and “present painting”. .

The exhibition in Bologna is completed by two new interventions site specific, Zero And Zero 1, on two paintings from the museum’s collection both justified Landscape with figures from Vincenzo Martinelli (late 18th century) exhibited in room 1. Zero And Zero 1, when they leave the original location of the Davia Bargellini Museum to be exhibited elsewhere, they will again activate a translation process and take the primary context with them.
“Acts” of the same poem, works of FRESH they build in time and space a dialogue between geographically distant places through an action of overlap where each story and identity is layered on the next piece.
Precisely in this perspective, the visit offers an experience of Virtual reality (made by Philip Pagotto / EL CA BO), through which the visitor witnesses the contemporaneity of the work by reuniting the cycle with its original source.

During the exhibition period, the Davia Bargellini Museum will host one talk to the artist for presentation of the concept book Warm Cool realized thanks to the support of Italian Council (X-Edition, 2021), International Promotional Program for Italian Art by the General Direction for Contemporary Creativity in the Ministry of Culture, of which Istituzione Bologna Musei | The Civic Museums of Ancient Art is a cultural partner.


Davide D’Elia (Cava de ‘Tirreni, 1973) lives and works in Rome.
Start working as visual designer in the 90s. He moved to London in 2007, where he began experimenting with his artistic poetics thanks to the creative collaboration with the curatorial collective CosmicMegaBrain.
Participate in several international exhibitions, including: In addition to existenceCordy House, London, 2009; Every other dayZico House, Beirut, 2009; DrawMusicDrawBooze Cooperative, Athens, 2008; Alcohol around pearsHeimatmuseum, London, 2013. Returning to Rome in 2011.
His works have been exhibited in museums and institutional sites such as MAXXI, Museum of XXI Century Arts, Rome, 2012-2013; Venice Biennale (In the water I understand, Vecchie Procuration, Venice, 2013); American Academy, Rome 2014; ArtistsUmbria National Gallery, Perugia, 2014; HorizontalCasa Italia (Olympic Games), Rio De Janeiro, 2016; Sensitive joint, National Gallery of Modern Art, Rome, 2017; Lissone Prize Finalist 2018, MAC Museum of Contemporary Art of Lissone, 2018.

In cooperation with:
Bologna Museumsinstitution | Citizens’ museums for ancient art

In the context of:
ART CITY Bologna 2022 on the occasion of Arte Fiera