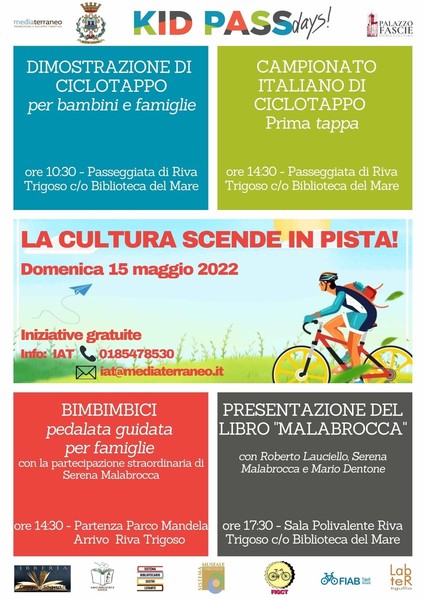 The aim of the initiative, which has never stopped, not even during the pandemic, is to spread the availability of a child-friendly culture of fun and games. Precisely for this Municipality Sestri Levante and Mediaterraneo Servizi, through MuSel – Archaeological and Urban Museum and City Library System, in collaboration with Fiab Tigullio Vivinbici, LabTer Tigullio and Associazione A.Bi.Ci. they organized a whole day of activities and initiatives under the motto “Culture goes down the track”, a day dedicated exclusively to cycling, nature, sense of sport, but also, precisely, to children and their families. The “beating heart” of the activities will be Riva Trigoso, where a demonstration of one of the most fun and stimulating “games of the past”, Ciclotappo, will take place in the morning, starting at 10.30, the Italian Gaming Federation. CicloTappo will be available for small demonstrations and for adults and children to play along the Riva Ponente seafront. CicloTappo is the name by which a very popular game was made official in our grandparents’ time: it was played with the “crown” of carbonated beverages, generally adapted with cyclist stickers, on a track or in open spaces, pushing the cap with a click of the finger, thus giving life to a competition resembling a bicycle race, an exciting challenge that involves everyone, adults and children. The association, born in 1993 thanks to the Genoese Gualtiero Schiaffino, also organizes every year the Italian Cyclotappo Championship, which is built up in different stages throughout the national territory, as a real Giro d’Italia: this year the first stage of championship start from Sestri Levante, Sunday 15 May at 2.30pm.

14.30, while the first stage of the Italian Ciclotappo Championship race takes place, BimbimBici starts from Mandela Park, the tour curated by Fiab Tigullio – Vivimbici and LabTer Tigullio, and organized together with the Urban Library System and MuSel, suitable for everyone and with special participation of Serena Malabrocca, nephew of the cyclist Luigi Malabrocca, who will delight the participants with her sympathy.
Bimbimbici is an initiative, promoted by FIAB – Italian Federation of the Environment and Bicycle, present in the area since 2006 and dedicated to children and their families, to promote the use of bicycles, raise awareness of the issue of road safety and raise awareness among citizens and politics about the need to rebuild public space and restore the original social function that has been lost over time. Precisely for these reasons, the initiative is also supported by SIP, the Italian pediatric company, for the healthy value that the practice of moving (on foot or by bicycle) has for children.
For all those who wish to attend Bimbimbici, the meeting is scheduled at 14.30 from Mandela Park in Sestri Levante, participants will walk an easy itinerary of about 10 km and arrive at the Biblioteca del Mare in Riva at. 16.30, where a snack will be set up for all participants.

At the end of the trip, again on Sunday 15 May, at 17.30, in the Multipurpose Room in the Biblioteca del Mare in Riva Trigoso, the day ends with the presentation of the graphic novel Malabrocca. A lonely man … at the bottom of Roberto Lauciello, Serena Malabrocca herself, Luigi Malabrocca’s granddaughter, will talk to the author, who will accompany the meeting with anecdotes and testimonies about the famous cyclist’s grandfather, and the author Mario Dentone, always passionate about sports too . The story of Luigi Malabrocca, the “black jersey” of Italian cycling. The champion, knowing that he could not finish first, decided to always be the last, not because he was not strong, on the contrary (he won 138 races in his career, 15 of which as a professional, and was the Italian cyclist). cross master). At the time, the “Black Sweater” was actually awarded to the last arrivals at the Giro d’Italia along with a nice cash prize. Everything goes smoothly for Malabrocca, between strategic stops and tricks to waste time until a rival arrives: Carollo, a fragile builder from Vicenza, a real schlong. Who will win the duel in the last place?

“In the darkness from behind, from the darkness of the news, at the bottom of the rankings, Luigi Malabrocca lit up in black: he decided to step slowly, slower, as slowly as possible. He wanted to finish, but after everyone else. A lonely man in disarray. And to do so within the maximum time set and allowed by the jury, he ran by consulting two clocks.Luisìn was a genius.When he understood – and how clever he was, very little was needed – that Bartali and Coppi would share the prizes destined for the winner, knowing that from the second of no one would write history or pass the cash register, he undertook.to finish last.Because the latter is the most fragile, weak, poor, vulnerable, unfortunate, therefore the most humane, and everyone, absolutely everyone, risks being moved, moved, pitying him to the point of saving him, supporting him, helping him because they are reflected in him, they reflect, they identify themselves Because the latter – in fact – look most like us , us fans, us fans, us athletes, but not champions, not runners, not athletes. Because the last one is the first one, but starts from scratch. And when he saw that at the end of the stages there were those who turned their hats upside down, walked among the spectators and collected money until the last one, that is, for him, Luisìn deepened his revolution. “(From the preface by Marco Pastonesi) , legendary from the golden age of cycling told in comics, with a foreword by sports journalist Marco Pastonesi and a memory of Serena Malabrocca, and presented to the occasion by Mario Dentone and Serena herself.

All the events planned for Sunday 15 May on the occasion of the Kid Pass Days (10.30 am a demonstration by CicloTappo, 2.30 pm the ride, 5.30 pm presentation of the book by Roberto Lauciello on Luigi Malabrocca) is free and open to everyone.