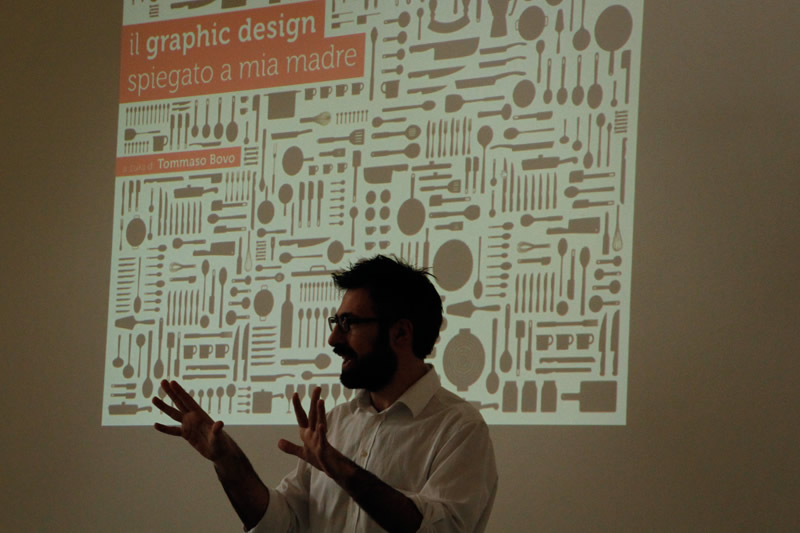 Hi Mami, did you know that next month I’m doing a workshop and I have the title: ‘Graphic design explained to my mother’?
– Thank you very much! mmm but what is a worcsciop ?!

And then one fine day my mother asked “Well what are you doing in practice”? He wanted me to explain to my job to him what I do all day often until well into the night. It was at that moment that I – a little forced by the events – for the first time tried to refer to the world of cooking, a language that my mother knows very well, yes she is a teacher in it. “Well, making the graph is a bit like cooking …” I began “You can not cook if you do not have ingredients, just as you can not communicate if you have nothing to say …” and so on, continue with metaphors and references, perhaps not always appropriate, but which achieved the purpose.

I found it an interesting tool, and when the faculty I teach at, IED – European Institute of Design, asked me to design a workshop to introduce my subject, I thought about repeating the experiment.
I started a workshop with my students, consisting of lessons and animated discussions, where the theme was cooking and its possible relationship to graphic communication. We no longer brought fonts or layouts to class, but pots and ingredients that would inspire us and bring us new stimuli and topics for discussion: we no longer talked about “graphics,” or rather, he talked, but through the kitchen.

In the beginning, the confusion was so great, the risk of not finding a way, the fact that one had not consciously wanted to outline a particular result, risked making that way a goal in itself. The job was therefore to surrender to the sensations and only subsequently pull all the necessary design ideas from them.

While the scent of rosemary and sage wandered through the classroom, we used the colors of peppers and eggplants to make new color cards. Cake rolls, pans, pots, scoops, potholders, colander can be transformed into textures, patterns or iconic elements. The food, the ingredients, the flavors, the aesthetics of the dishes have become our guide, our food for thought. Each of us has brought their own experiences with the vast world of cooking, tastes, memories, tools. We then analyzed the language of the cookbooks, from the academic and courtly Artusi to the mainstream of Cooked and eaten.

We then analyzed the representation made of cooking on television; what is happening in the street markets; we examined the semantic value of food. All of this research was fundamental: just as a chef needs ingredients to make a dish, the graphic designer needs content to communicate. The truth of the concept lies in its banality: before you communicate anything, you must have something to say.

The class has been transformed into a large kitchen, filled with colors, tastes, scents, but also drawings, collages, schemas, until they arrive at a workshop event that has reached its third edition, and which we have the title Graphic Design explained to my mother (here on the Facebook page).

Those who participated made a visual recipe, a kind of info-recipe, which each told a lot about the people who made them: those who told us about their country through dishes and ingredients that were unknown to us, those who told us about the steps to order a pizza from home as a manifesto of the contemporary recipe. Everyone gave their own vision of cooking, everyone used the tools of graphics.
We discovered, with a little surprise, a common and understandable language even of those who come from other cultures or of those who have never touched a forehead or a pencil!

Just as the chef needs a recipe for cooking, the graphic artist needs a design method to carry out his projects: “ideas without a recipe are deep-fried air” was our slogan.