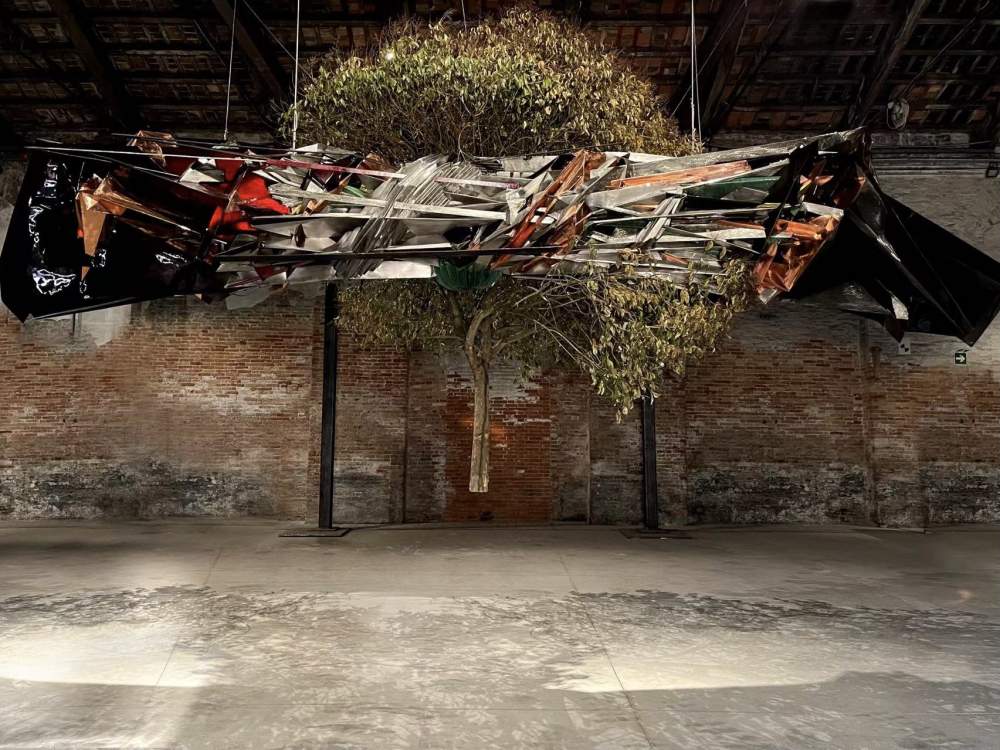 A conversation with Wang Yuyang, a Chinese artist for the first time at the biennial

Among the artists present in the Chinese Pavilion at the Venice Biennale 2022 is Wang Yuyang with two works: “Quarterly”, from the series “Wang Yuyang #”, hanging in the middle of the ceiling, and “Snowman” (Snowman fist), from the series «Untitled», set up in the small green space outside the pavilion. Wang Yuyang, born in 1979 in Harbin, the city of ice, constantly examines in his works the relationship between the “human” and objects, based on his skepticism of a perception of reality based on prejudice, against the most obvious truths, common sense and any pre-established cannon. His first time in Italy was in 2008, for the exhibition “China China China !!!” in the Palazzo Strozzi in Florence, where he returned in 2019 for his personal exhibition at the Museo del Novecento, “Lucciole per Lanterne”, his first participation. at the Venice Biennale.

Can you tell us something about the origins of the two series «Untitled» and «Wang Yuyang # “?
It all started with the series “Wang Yuyang #” (WYY #), with the idea of ​​”replacing the artist’s creation with software” using programming to teach the PC to create works of art on its own. Initially, however, the developers I worked with were not able to write code for this purpose because programming techniques were not as prevalent in China at the time as they are today, and they were not intended for imaging and modeling. After about a year of constant discussions with one of the programmers, we found the right approach from which the “Untitled” series was born: computers do not understand our language, they only work with a binary code, 0 and 1. I found the way to compose human language and code used by PCs that allow them to follow instructions and manage software such as 3D Max or Painter. From then on, I started entering text commands that controlled the program and generated a work of art. Materials and dimensions were determined by the machine, and I followed the instructions of the computer to find the materials to give life to the physical object. The title of the work was also determined by the PC, based on the name with which the file was automatically saved at the end of the process.

The name of the work in the garden, “Snowman”, was born like this: the inserted introductory text is the quote taken from a spell pronounced in the animated film Nezha defeats Dragon King, and represents the metaphor of the phoenix being reborn. The series was born in 2012 to address the issue of cognitive approaches: When people see a work, they see an object with a form and try to give it a meaning based on what they know and their experiences. The interpretations of a work generated by an algorithm may be infinite, but they are not the truth behind the work because it is born from a text string. On the contrary, if an artist were to create from the same text, he would give life to a variety of content, according to his own interpretation. Here lies the opposition between the viewer’s intentions and those who create: In our perception of the world and the universe, each of us collides with cognitive gaps, which we try to overcome by creating a logic based on our own knowledge, to understand and verify the existence of Reality. People are constantly trying to “give themselves an explanation.”So how did you get into the WYY # series?
At the end the «WYY# “Was born in 2015. I wrote a program that could create works on my own, and the program became the artist. When he started operating, he was no longer under anyone’s control, and what he wanted to do could not have been foreseen, every choice became random. The computer could access the Internet, open a website, take words and pictures, translate them into code, and generate a work in absolute autonomy, by determining the sizes, techniques, and colors of each element. And the title of the work was chosen from a database, depending on a random process. I was trying to understand what the logic and behavior of the machine is, what is the relationship between man and the objects he makes. After being created by man, objects again try to control humans and change their cognition of space and time. In this process, I am the one who produces and uses the work generated according to the computer instructions, I and the public are in the same position. The artist renounces his supreme right, to create, and becomes a producer. The first time I started “Quarterly”, I wondered why it was so strange and why the tree was in such an unusual position, but everything had been determined by the machine: the control that the computer performs is completely random and irreversible, which makes the work new and unique in every moment, endowed with an unrecognizable and uncontrollable nature.

Before you made these two series, you had made others with works of very different forms than these. How did you come up with the idea of ​​using computer generated creations?
I have always experienced a lot. My 2006 series Breathing, for example, aimed to make the public understand that objects are also living beings. Then I made other series about the rights of the subject: paper, tapes and films are materials created to record human language, texts, words, life. For the work “Tape” (Nastro, 2010) I went to a factory and ordered plain cassette tape, and then started recording at the beginning of production. I recorded until the tape was produced, then I recorded the taped tape so the tape could tell the story of one’s birth. In another, The Narrative of a Stack of Paper, I made a documentary on papermaking, from cutting the tree to the final step, seven days in total. Then I converted the documentary into photographic images and printed them on paper so the paper could tell its own story. If objects can have the right to self-narration, well, I thought, then let’s also give them the opportunity to create themselves, and so WYY # was born.

What would you like to explore in the future?
Last year, I started a new series on the collaboration between man and machine. We think we can always have control over the machines, but in a way, they control us. More than the subject of who controls whom, however, I am interested in the coexistence and integration of man and machine.Does the work you exhibited at Palazzo Strozzi in 2007, “Artificial Moon”, belong to another series?
To make it, I used 10,000 low-consumption bulbs. Light bulbs were invented to overcome the fear of the dark, but when we began to feel ashamed of using them so much, we started talking about energy savings and emission reductions, and energy saving was invented. At first glance, everyone was amazed at the work of 4 meters in diameter, then they began to wonder “Who knows how much energy is wasted”. It’s a typical human reaction: to create amazing shows, and then get guilty and start asking a lot of questions.

At university you studied scenography: is it something that still affects your work?
As a teenager, I had studied painting and I wanted to be a painter. Drawing is an essential element, it is a part of human nature, it can not be dispensed with. While studying scenography, I discovered various other artistic forms of expression. Many artists are constantly searching for their style, their language, their symbols. In my opinion, they are only categories created by art history, by critics, by galleries: each artist must have his own recognizable style. I have always tried to stay away from labels, what interests me is the work, not “me”.

Is there a project you have not done because it has been censored, or because it is too complicated, or you just are not done yet?
There is one, linked to a scientific expedition, which involves collecting samples of glaciers in China. But communication problems have emerged, as if scientists do not understand what I am doing and consider art a useless thing. I’ve been running it for two years, now I’m stopped. But I have not given up the idea, I will look for foundations or technologies that can help me.

Who are the people who have influenced you the most?
My university supervisor, Lu Shengzhong, is dedicated to combining traditional and contemporary art. He has a rigorous and very honest approach, which has been a huge inspiration to me. It helped me understand that the important thing is to put faith and enthusiasm into every work of art.