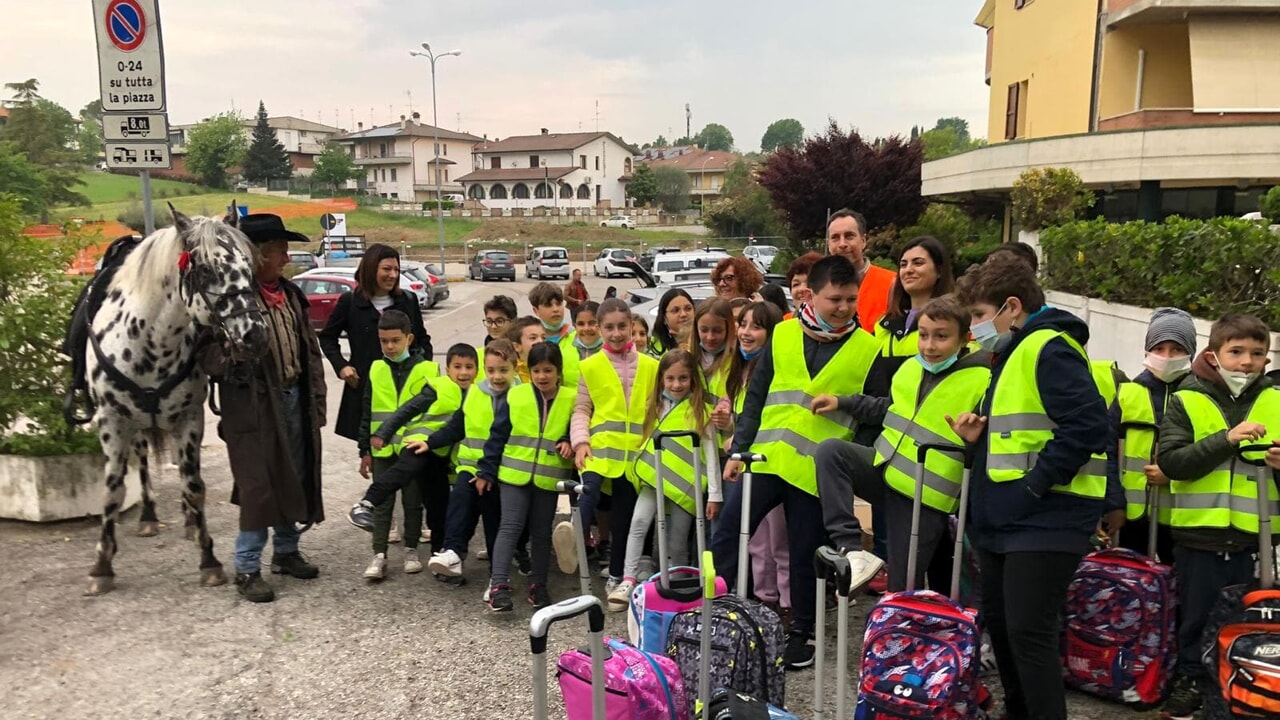 Fratta is in revolt against the many innovations: After the two public meetings on 19 March and 2 April, the participation process in “Frattastica” gets off to a good start on foot and by bicycle to get to and from school. To make life for the residents of Fratta Terme more sustainable, we start early in the morning with the children from “Gino Mattarelli” Primary School. In fact, adhesions to the piedibus have been opened with two routes: one from Piazza Colitto and the other from Via Tro ‘Meldola (in front of Da Lorenzo Restaurant). About 10-15 minutes to get safely to school on the sidewalk, in a group of friends to start the day with the right energy, accompanied by volunteer parents and grandparents.

Even for the most remote, the bicibus is expected from the terminus Molino del gesso, where the hair blows in the wind towards the primary school. The services are free and were inaugurated this morning, Monday, May 9th. The 32 children who participated in this first ride found a double surprise waiting for them: the Yankee, the horse that escorted them to school with a letter of thanks for this small, big revolutionary gesture in the name of all animals and creatures. on the planet. In addition, they received a small gift from the merchants of Fratta Terme, which this first week will offer gadgets and snacks to all participating children … and beware of fines! Children are given “moral fines” to all motorists and non-motorists who park on sidewalks, in double pullers or worse, who leave the vehicles with the engine running.

Mayor Gessica Allegni and Councilor Raffaele Trombini were present at the start and followed the boys throughout the journey. “It was wonderful to see boys and girls excited about this experience and also aware of its goals in terms of environmental impact. An example for all the citizens for whom the initiators of Frattastica are thanked, who have put their heart and soul into a participating project, that is beginning to bear fruit! ” says the mayor. “I believe that this initiative reflects our desire to revive Fratta Terme. An important initiative for children, for the environment for society and above all a precursor to what we hope will be a path for new useful, innovative and sustainable projects – adds the Commissioner.If you really want to improve the place where you live and teach younger people how important it is to live in a healthier environment, adults must lead by example and not get caught up in the madness. is an opportunity to rethink their time: children can be accompanied to the terminus or to the stops and join the “most ecological bus available”, under the supervision of a “driver” and some “controllers”, allowing parents to to go to work a few minutes in advance.If the children give us the enthusiasm, the parents must also do their part: Volunteers are sought even only one day a week.We start with a few but very important rules: be punctual, do not push e your teammates, do not overtake, do not start alone, but wait for the group and have as much fun as possible ”.

To start on the right foot, the children at the “Mattarelli” school have unanimously decided to be named Frattengers, thanks to a competition set up by the Casa del Cuculo Cooperative and the Fratta Parents’ Committee in collaboration with the Comprehensive Institute, Bertinoro Municipality and the associated associations ” Frattastica “. Fractastica is a participation process funded by Act 15 of 2018 in the Emilia Romagna region. The promoters are happy, starting with Elena Salvucci, who declares: “maybe it may not seem like anything but news, but for us it seems like a small miracle. There are many main characters: a small country school, merchants who are mobilized, a participation process , a horse named Yankee, a group of superheroes named Frattengers and the desire to change the world from our little one “.