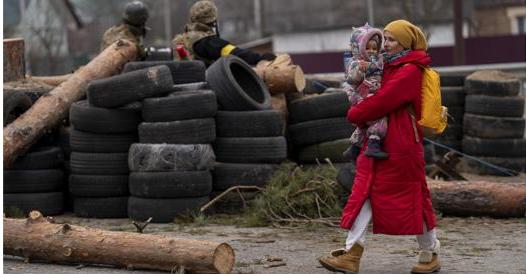 After the coronavirus and the abnormal state of seclusion, a war terribly close, with the images of black buildings, destruction and death that sow anxiety

During the Easter lunch, an 11-year-old girl, a girl with great intelligence, asked her father, one of my best friends, if with the war they would have called him back to arms. He replied that this risk was not there, but the girl insisted on asking if she risked going into battle against her fifteen-year-old brother.

How many ghosts now live in boys’ minds, how many fears are consuming their best time?
They spent two years in a state of reduced socialization spaces necessary in that season of life. They have been denied the opportunity to go to the cinema, play sports, attend parties and celebrate birthdays, perhaps as important as the eighteenth. They were unable to get to know the school as an experience of encounter and growth, they struggled to cultivate their first passions, their first emotions. They used social media as a square, as a wall, as a showcase for their thoughts. But everything happened without the physical, so much the more necessary in the bubbling time.

And they lived with fear. To contract the virus, to be vectors for grandparents and parents. They introduced anxiety, swallowed messages of prohibition and prohibition, came to terms with the idea of ​​death prematurely. Under the sign of fear, they took their first steps beyond childhood. Every parent, every hospital doctor, every psychologist, every teacher will be able to tell the extent of a disorder that has led to a thousand manifestations: attention or eating disorders, mild irritability, the tendency to withdraw within themselves and sometimes to to harm oneself.

Now the war, a terribly close war, is hitting people dressed like us, in houses like ours. A war in Europe that occupies every space of information, every speech, so that it takes your breath away. And the pictures of the black buildings, of the dolls left on the streets as children, of the creatures lost by the hand of purposeless mothers.

War, the bastard of human relations, thus ends up being a distant bugbear, a spectacular film landscape. It enters everyone’s life like a snake, wraps it, takes its breath away and blackens the present and confuses the future.

The predominant sign of daily life becomes fear, that in children it grows much larger than adults imagine. Fear of illness, war, parenting, household expenses, the feeling of precariousness that limits time to an anxious and reduced dimension that has no room for memories and no belief in the future.

As Hannah Arendt used to say: Total dominance really becomes like this the moment it squeezes the private and social lives of its subjects into the iron grip of terror.

Fear is an instrument to control. Even in a small community, not just for the purpose of the dictators. The child of the highly civilized Vicenza, who for years paid thousands of euros to an older boy to protect him from the thugs who persecuted him, the symbol of the crippling power of all violence. The boys begin to know early on, the law of the strongest. And the girls even faster.

Under the Nazis, a young man who entered the psychoanalytic literature dreamed only of rectangles, triangles, octagons, as dreaming was forbidden.

My friend’s daughter asks her father that question brings forth something that inhabits his silent thoughts. What his mind draws when he listens to killed children or sees the rooms with the games of his peers destroyed by the rubble and whipped by the air from glassless windows.

I saw a photograph of a Ukrainian child bringing food to his starving mother’s grave in Bucha.

That child is the symbol of the suffering that Putin’s aggression has inflicted on Ukrainian children. Until mid-February, the woman was busy feeding her son every night. The war has absurdly reversed the roles, in a death context.

The will of the Russian power to exterminate these people has serious side effects everywhere.

Benjamin Vilkomirski, author of a beautiful book reminiscent of his experience as a persecuted little Jew, recalled that afterwards the adults obsessed with him repeated: Children have no memory, children quickly forget, you have to forget everything, it was just a bad dream.

Instead, children are marked for life by fear, we adults have a duty to always make them live as few as possible. And to accompany them in their infinite love for the most beautiful of human conditions: freedom. The freedom to be what you want, to live as you want, in a context of common rules. Bogeyman for children has always been the boarding school, a place of homologation and loneliness, of coercion and submission. Peter Pan can not stay in uniform. Never.

In these terrible, pitch-black days, we kids explain it in history, bullies have ultimately always lost.

Let’s listen to them, respect them, let them tell their thoughts, we take their concerns seriously.

We keep the lights on for them, even when everything seems dark.