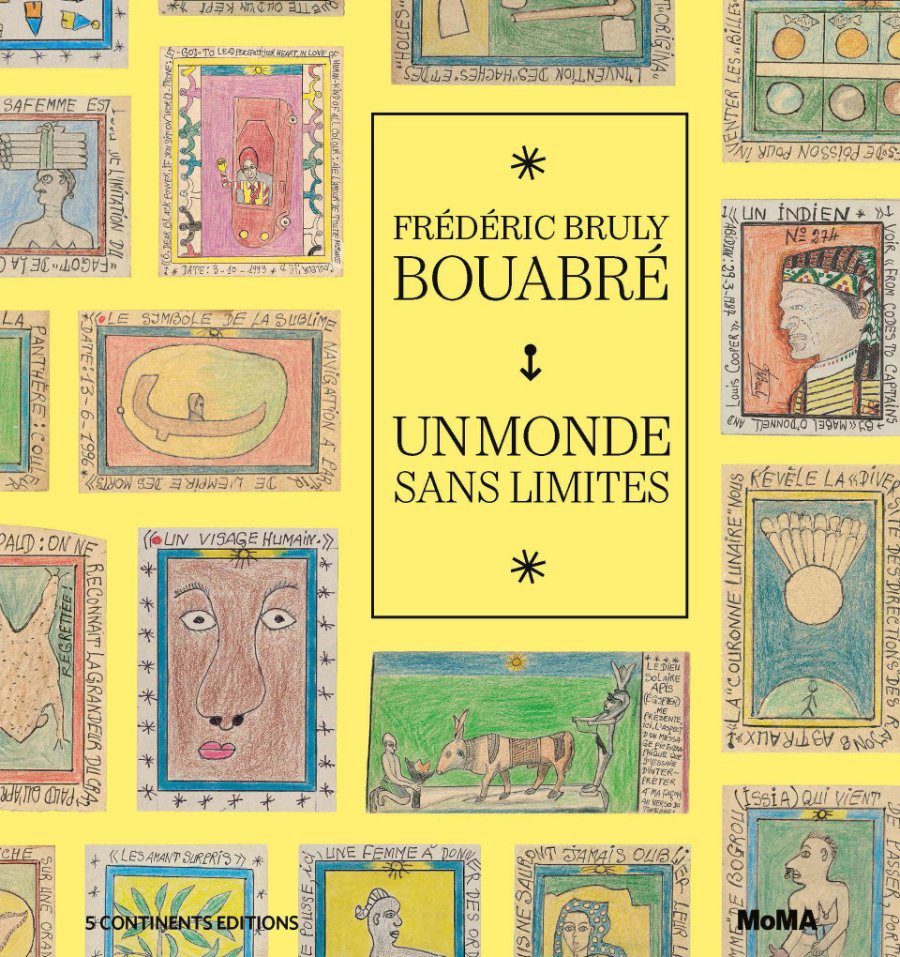 in co-edition with The Museum of Modern Art, New York

A WORLD WITHOUT BORDERS

The volume accompanies the current exhibition at MoMA in New York

photo Cover of the volume Frédéric Bruly Bouabré. A world without limits,

co-edition in French of the Museum of Modern Art, New York, and 5 Continents Editions.

Self-taught artist, Frédéric Bruly Bouabré (Ivory Coast, 1923-2014) is one of the most significant international exponents of the second post-war period, not only for his visual creations, but also for his contribution to cultural fields such as poetry, philosophy and non-fiction.

5 Continents Editions – in co-edition with The Museum of Modern Art in New York – presents his work in the volume Frédéric Bruly Bouabré. Un monde sans limites, in French, which accompanies the exhibition running at MoMA until 13 August 2022.

Through a detailed chronology of his life and over 600 works, including drawings and manuscripts, the book recounts the long and multifaceted path of the Ivorian artist who transformed drawing into a fundamental tool for inventing a new writing system. In the middle of the volume are two of Frédéric Bruly Bouabré’s most significant works: the monumental work entitled Connaissance du monde (1987–2008) – a kind of visual encyclopedia composed of a series of drawings made with pens and crayons on cards 10 × 15 cm, the result of a

long philosophical research into African reality and the meaning of life – and Alphabet Bété (1990-91), an alphabet consisting of 448 one-syllable pictograms that seeks to connect European cultures with African ones in a fraternity perspective.

In 1948 he received a “revelation”: from then on he called himself Cheik Nadro (he who does not forget) and began a philosophical research into the meaning of life that led him to seek divine truths in nature and to interpret reality, first through writing and then through art. From the late 1970s until his death in 2014, Bouabré created hundreds of colorful designs on postcard-sized cards with a distinctive style: animated figures and abstract elements enclosed in hand-drawn frames with text describing the subject or content of the drawings.

Considered today one of the most important African artists and interpreters of the twentieth century, Frédéric Bruly Bouabré has during his career exhibited at the most prestigious international institutions: from the Center George Pompidou in Paris, the Guggenheim Museum in Bilbao, the Tate Modern in London and Portikus in Frankfurt. He also participated in the 55th Venice Biennale, the Documenta in Kassel and the San Paolo Biennale.

Among the upcoming exhibitions scheduled for June 2, 2022, the Parisian gallery MAGNIN-A presents the exhibition Fédéric Bruly Bouabré. On ne compte pas les étoiles, with more than 300 drawings including numerous historical works by the Ivorian artist.

With André Magnin, gallery owner and specialist in modern and contemporary African art, who discovered Bouabré back in 1988, 5 Continents Editions collaborated on the occasion of the publication of the monograph by Omar Victor Diop.

5 Continents Editions, an independent publishing house of art books and exhibition catalogs, which turns 20 this year, was founded in February 2002 in Milan by Eric Ghysels, Belgian-Armenian by birth and Italian by adoption. Today, it is considered a world reference point in the field of art outside Europe. Its catalog includes numerous publications dedicated to art in the broadest sense of the term: archeology, ancient, modern and contemporary art, decorative art, fashion, design and photography. Led by the passion and enthusiasm of the publisher, the publisher is animated by a dynamic team of professionals, passionate and multilingual. These qualities greatly facilitate daily relationships with writers, artists, foundations, and museums around the world, ensuring that each volume has its own well-defined “soul.” The minimalism of the graphics, the search for images and prominent texts combined with the high quality of photolithography, printing and binding make each publication the tangible reflection of the forms of expression and creation that have authenticity and authenticity as a common denominator. one soul. . Strengthened by a prominent international distribution, the volumes are published mainly in French and English – although there are also titles in Italian, Spanish, German, Portuguese, Arabic, Russian and Chinese – and boast worldwide distribution. For more information: www.fivecontinentseditions.com