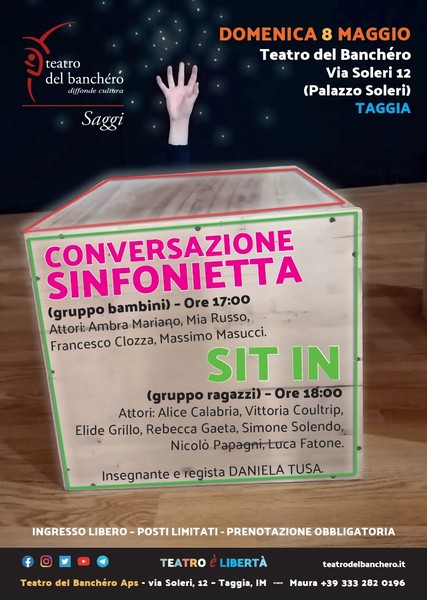 It’s time for essays on Banchéro. The weekly courses in the school year 2021-2022 at the Theater School “Preparatory” are nearing completion, and as usual, the participants are called to implement what they have learned. The agreement is until Sunday 8 May at the Aps Teatro del Banchéros headquarters in via Soleri in Taggia, at 17.00 for children and at 18.00 for young people. There is free admission, limited places, reservation is required (Maura +39 333 282 0196).

The young actors were prepared by Daniela Tusa, in her first full year of collaboration with Banchéro. They will present two works that the teacher has adapted and staged.

Tusa, actress, director and teacher for 10 years at the Dramatic Art School “I Pochi” in Alessandria, is a conductor of theater workshops, she trained at the Scuola del Teatro Stabile in Genoa, and then completed her education with various teachers, including Judith Malina, Dominique Dupuy, Cesar Brie, Gianluigi Ghersi, Antonio Catalano and Pupi Avati. His work experiences range from theater, to cinema, to television, as well as to teaching, matured from a tenacious and intense laboratory activity conducted since 2000 in schools at all levels: from childhood to adulthood.

“Conversazione Sinfonietta” is the title of a short play by Jean Tardieu, one of the leading exponents of the Teatro dell’Assurdo, whose work represents a little jewel. The actors perform a concert in the form of a quartet: the voices replace the instruments and the music becomes a talk. The concert is divided into three movements: Allegro ma non molto, Andante sostenuto and Scherzo lively. Each of these movements deals with different topics: the contrast between dreams and reality, resolved with the conclusion that health comes first, the restlessness that stands out from the relationship between life and the hereafter, chased away by the desire for lightness and to last, the joys of the table and their gift as the greatest act of love. Tardieu presents an excerpt from our daily speech, which consists of the times of most banalities that have been published as deep reflections. The prosopopoeia, which revolves around the arguments, produces a grotesque and amusing effect.

With this concluding exercise, the students summarize in their basic passages the didactic path, where emphasis was placed on the preparatory aspects of the theatrical discipline: listening, concentration, relationship, rhythm, improvisation, and interpretation. In the preparation of the final work, special emphasis was placed on memory techniques (auditory and kinesthetic).

“Sit In” (group of children)

SIT IN (after an idea by Daniela Tusa with contributions from the students in the theater course, the children’s section), is a metaphorical story about the delicate steps of growth, also here lived between dream and reality and between the intimate dimension and of appearance. On stage, there are seven sessions for seven actors, interpreters of themselves, who in contact with an unknown reality seek their own identity in it, colliding with the boundaries that the desire for personal freedom sets when sharing spaces and situations. We will see a sequence of scenes that describe the order of different emotional states: the amazement, the confusion, the need for exploration and rupture, obsessions, conflicts, desires, and the feeling of solidarity that changes the size of everything towards a new consciousness. It is a theater of listening and physical actions, a story of emotions through images, where the word plays a marginal role that only manifests itself in the urgency of saying needs, grasping insights, telling revelations, and establishing intentions.

The work is the final result of a year of laboratory dedicated to the themes of relation and inclusion. A path to exploration, discovery and growth of the individual’s expressive and communicative potential.

“We have all been through difficult years, crooked years, in which our security has lost all meaning – declares Marco Barberis, President of the Teatro del Banchéro – let’s imagine what it may have been like for children, young people, to suddenly be isolated from all and believe that it is normal.The theater has always been a place of meet and share.In short a great curator where those who do it (on stage) and those who see (audience) enter an area with mutual exchange of emotions, of beauty. “Beauty will save the world!”, we used to say once, and we think it’s still like that, that’s why we’re here.