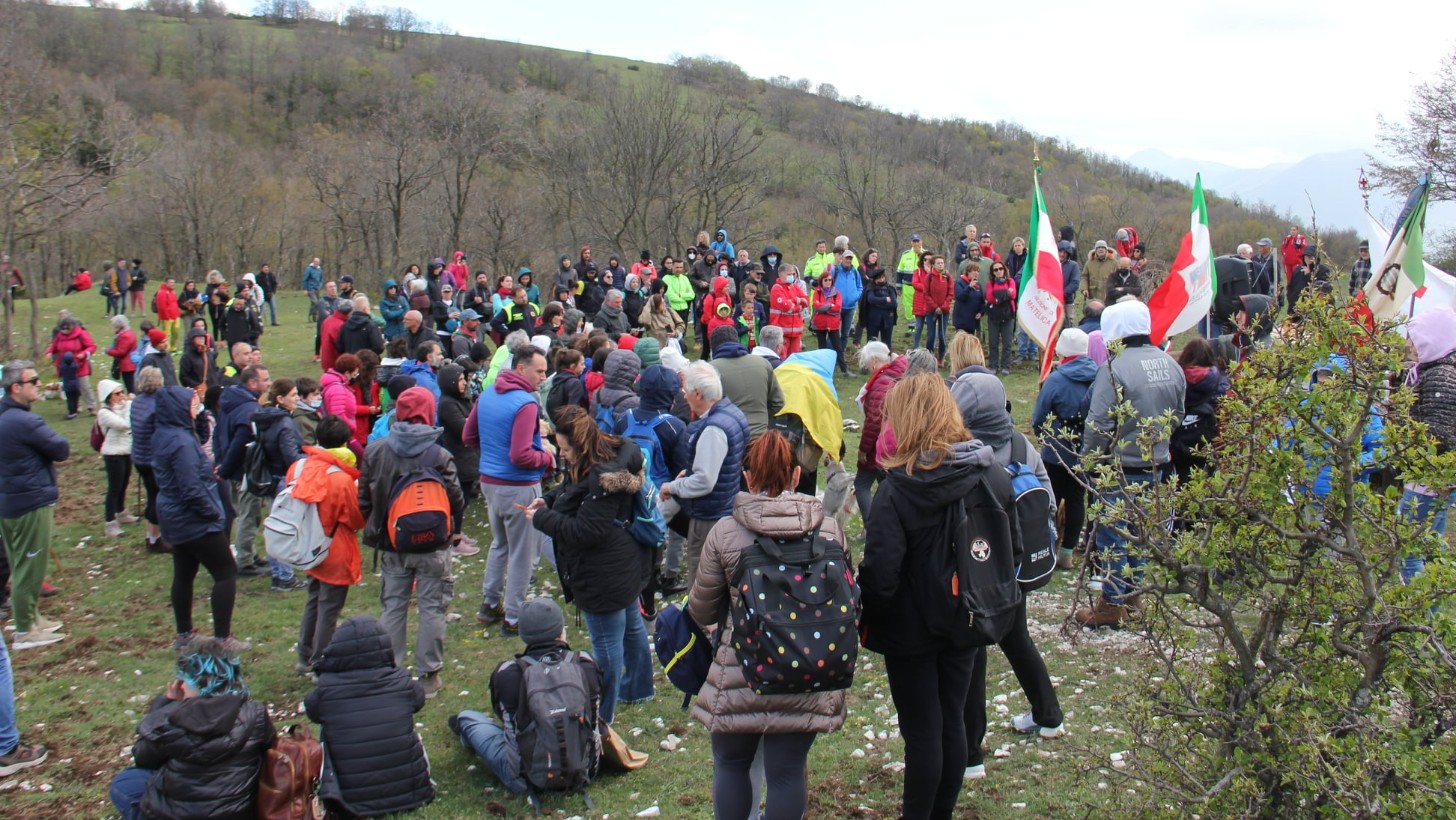 4 ‘of reading
07/05/2022 – On April 25, the celebration of liberation from Nazi fascism was celebrated with March 17 on the Paths of Remembrance at the monument to Captain Salvatore Valerio. A beautiful day where many people, boys and girls, were involved.

Present among the authorities were the mayors of Matelica, Gagliole and San Severino Marche (to whom we publicly address our congratulations for the gold medal for civilian merit, because “during the war it participated in the partisan struggle, hosted and fed hundreds of displaced people. It was the scene for killings, numerous executions and killings of German troops and to the detriment of the people. the inter-municipal section ANPI “March 24”, the one in San Severino Marche named after “Captain Salvatore Valerio” and the president of the provincial committee Francesco Rocchetti.

To encourage the walk, poets from the Lottava Rima Association, who played and sang along the paths and at the memorial stone in memory of Captain Valerio with the children from the primary school in IC “E. Mattei” by Matelica – Esanatoglia. Stefano Fabbroni (Lottava Rima), tells the story of Banda Mario in verse and can be listened to again on the school’s website, on Amnesty Kids or on Anpi Ventiquattro Marzo’s Facebook page.

The students made a video with their drawings to tell the story of the Mario Battalion, a group of partisans consisting of women and men from different countries, religions and languages, operating in the areas between San Vicino and the Canfaito Mountains. The video comes from a one-year school path linked to the theme of non-discrimination, elaborated in the project by Amnesty Kids (teacher referent L. Biasetti), thanks to the contribution of ANPI on March 24, historian Matteo Petracci and Associazione Lottava Rima. A few years ago, it was the kids who accompanied Chiara Pacifici from Amnesty International’s education and training office to the walk on Meadows, where they could hear the story of Aden Scirè and the other Africans from the Mario Band, directly from her daughter.

In this school year 2021/22, history has become a didactic unit in the Amnesty Kids notebook, “What is a story?”. By studying the history of this battalion, students understood how friendship, solidarity and knowledge are the only antidote to racism. This is how the parents tell about the project and the walk: Marzia: “It was an engaging, very educational initiative, and the children had a lot of fun”.

Terenzio: “It was a huge pleasure to see my son with 31 other children sing on April 25 on the theme of discrimination”.

Giuliana: “The April 25 celebration! Happy and contented children, happy to show the fruit of their commitment”.

Leonardo: “Thank you to the teachers. A lesson about connecting a simple date with the sacrifice of men who felt the need to defend their country even in exchange for their lives, to give it back to us for free as we live it today. Thank you to all the children for their warm participation and for celebrating freedom together. ”

It’s the children’s impression. Vanessa: “For me, the walk on April 25 was very nice and I had a lot of fun. I saw Valerio’s grave for the first time. I would like to do it again.”

Alex: “It was very nice. We went for a long walk, we all sang, we ate. We also saw Captain Valerio’s grave. I will definitely go for this trip again next year”.

Emi: “I really liked this. It was beautiful to sing and even more to be at Liberation Day everyone”.

It was: “I enjoyed it, despite having walked a lot. In the end, I enjoyed singing both” Bella Ciao “and the poem sung by Battalion Mario.”

Mattia: “I liked the walk because I was with my friends; I enjoyed it because we all sang together. At one point I was tired, but I enjoyed it anyway”.