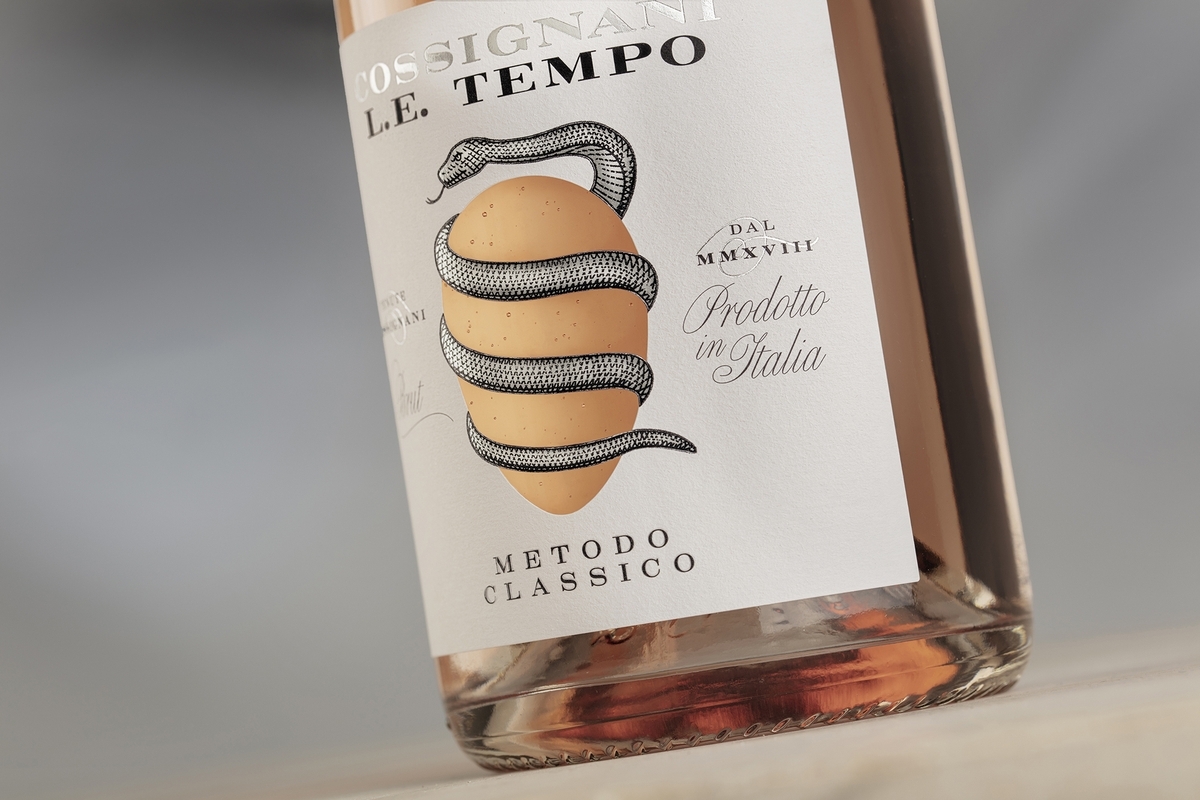 As part of the 26th edition of “Vinitaly”, held in Verona from 10 to 13 April 2022, the graphic artist from the Marche region Andrea Castelletti was awarded the “golden label” for the category of sparkling wines made by the classical method. We interviewed him

More than just wine labels, hers are real tales: tales that tell the stories and myths of ancestors. Andrea Castelletti (San Benedetto del Tronto, 1985), graphic designer former collaborator for brands such as Lavazza, Technogym, Barilla and Pepsi, is a proponent of visual communication.
In recent years, its activity has mainly focused on the wine sector with the aim of giving a new image and prestige to numerous excellences in the Italian territory. The conquest of the title “golden label” in the latest edition of Vinitaly It was the right opportunity to talk to him, understand his poetics better and more generally understand the dynamics of a rapidly growing sector – the one with graphic design for wines.

The design of wine labels is certainly a growing sector, yet not known by everyone. How did you approach this world?
My very first contact with this world took place in 2010. At that time, I was working as art director at TW2, an advertising agency operating between Milan and New York. Our agency was involved by colleagues from Tribal DDB Milano in the tender for the restyling of the brand identity of the consortium for the protection of Franciacorta. For this project, we developed a beautiful visual identity inspired by Alighiero Boetti’s checkerboard of colored letters. But unfortunately, as sometimes happens, our proposals never saw the light of day.
Three years later, in the summer of 2013, I was contacted by Cantina dei Colli Ripani, a historic cooperative in the Marche region, which at the time was struggling to establish a new collection on the market consisting of seven wines dedicated to catering. Since then, a beautiful partnership has begun with the vineyard and with the world of wine in general.

Before you specialized in this field, you had already collaborated with prestigious clients, mostly unrelated to the wine sector. Can you give me a name?
Fiat, Citroën, Vodafone, Davide Cenci, Technogym, Pepsi, Lavazza, Barilla, McDonald’s, Coca-Cola, Evian, Simmenthal and Ferrero, to name a few. But in recent years, I have also been fortunate to be able to compare myself with the cinema world, and the collaboration to create posters for all Gianfranco Rose’s films.

Given your education and the prices achieved in various graphic fields, you never thought that it could be a “risk” to specialize in a sector that is considered a niche, at least until for a few years since?
In fact, I almost immediately saw the opportunity to bring my wealth of knowledge into a sector full of potential, which in 2014, when I realized my first project in the wine sector, was still very unexpressed. I’m an art director, I come from “advertising”, and in every project I always have a very strategic approach.
Packaging is never just the clothing of a product, but is part of a broader communication strategy.

THE CASTELLETTI PROJECT IS AWARDED AT VINITALY

Recently, your label for LE Tempo wine from the Cossignani winery was awarded a “golden label” at the 26th edition of Vinitaly. How did you receive the news?
With immense joy. This year, there were 287 projects in competition, which came from all over the world. The level of competition that I have been lucky enough to win with other projects in the past is always rising. The opportunity to trade with the best companies in the sector is an opportunity for growth at all levels.

That label hides symbolic and archetypal elements contained in a design played on transparencies. Can you tell me the story behind the project?
The visual imagery we have chosen is inspired by mythology. In ancient times, the serpent was the symbol of Chronos, the divinity that represents the passage of time. Legend has it that the serpent gave birth to the cosmic egg, the treasure chest of the universe, from which everything originates.
The snake is depicted on the label wrapped around this cosmic egg, which has been artificially punched to create a magnificent “window” on the wine, the true coffin of our history. These elements, which we find in the logo and label, give shape to a memorable identity. We wanted to create a solemn, precious and at the same time innovative bottle that could tell the most magical aspect of the production and the story of Cossignani.

In fact, the theme of time is crucial for the Cossignani company, an excellence in the Marche region born as a “challenge” for the local market.
Letizia and Edoardo, the two guys who founded this winery, are two young brothers who have decided to give up their careers to pursue the crazy dream of creating Classic Method Sparkling Wines with native vines from their country, Marche. Time is the basis of the project: Like everything beautiful in life, a bottle of Classic Method makes you want to, and always pays the wait. And time is always the most valuable resource that Edoardo and Letizia invest in the production of this unique and extraordinary idea.

GRAPHIC DESIGN AND STORY STORY ACCORDING TO CASTELLETTI

I used the term “stories” earlier, not surprisingly. You are a story hunter who you then turn into symbols and figures. What are you interested in conveying in your works?
To me, graphic design and communication plus is a general, not an aesthetic process, but a storytelling tool. Through my projects, I always try to convey a message that may be relevant to the consumer.
Today, people buy not only a product for its qualities, but also and above all for its history, its values. In that sense, packaging is a very powerful tool, which, however, must not have the task of telling everything in a didactic way: it must amaze and ignite the observer’s curiosity. In a world polluted with messages and inputs of all kinds, people choose what they want to be aware of. Achieving these goals is not always easy, and once again, the secret is time.

We end with a note on the area, especially the area in the Marche region – where you were born and where you returned to more or less stable sessions after several years in Milan. What does it mean to you to be associated with these places?
In Milan, I grew up as a person and professional. Returning to the Marche more often was an opportunity for me to put my experience at the service of this country, which still has a lot of unspoken potential. A potential that consists of all the stories that are essential to me and to my approach to the project.

More generally, what do these places have to convey to those who do not yet know them?
In Marche I have again learned to celebrate the value of simplicity. One of my designers, John Maeda, said that “Simplicity is about removing the obvious and adding what is meaningfulThe marches in this sense are full of simple but very significant things. An example can be found in the narrowest alley in Italy located in Ripatransone, in the province of Ascoli Piceno, which we celebrated and told through the label of a wine that won Communication Arts Award of Excellence.