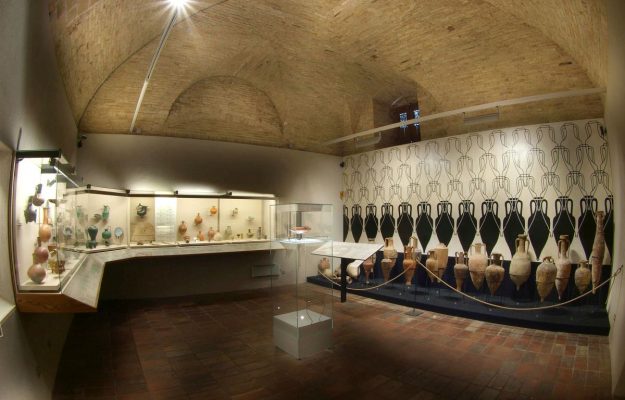 Historical palaces, ancient castles, archeological parks, libraries, museums and even temples and caves from all over Italy, in places where the connection between culture, wine and oil has deep roots in the beautiful country: it is here, tomorrow the 7th of May will be back to attend “The National Day of Wine and Oil Culture”, promoted by the Ais-Italian Sommelier Association again among people with many organized agreements in collaboration with the ICQRF Central Inspectorate for Quality Protection and Combating Agricultural Food Fraud under the Ministry of Agricultural, Food and Forestry Policies and, for state museum initiatives, in coordination with the Directorate-General for Museums and the Directorate-General for Education, Research and Culture Ministry of Culture, to train on the most representative products of the Italian cultural-gastronomic heritage, from students to enthusiasts.
With through museum and educational trips, the renewal of the three-year agreement, the three Ministries of Education, Culture and Agriculture and the AIS have committed themselves to continuing the work of disseminating and raising awareness of the knowledge, economics and traditions associated with wine and oil production in the Italian regions; historical-documentaries. During the “National Day”, students’ participation is promoted with special attention and while respecting the autonomy of the school, the development of educational courses dedicated to direct knowledge of the culture and socio-economic characteristics of individual territories related to oenological traditions and olive oil traditions is encouraged. There will also be training initiatives, including multimedia initiatives, on specific topics such as agri-food excellence and the fight against counterfeiting, and orientation activities in secondary schools in synergy between the regional school offices and the national network of agricultural institutes. (Renisa), which enhances a wealth of experiences built in recent years with schools throughout Italy, not even interrupted by the epidemiological emergency.
“The day – explains the president of AIS, Antonello Maietta – will still have training as its theme this year. It seemed appropriate to continue this path in order to communicate the value of the territory to all citizens and in particular to students. We have thus renewed our obligation to spread and make known the places where the link between culture, wine and oil has deep roots ”.
From north to south, there are several places and historic buildings that host the “National Day”. In Basilicata, the appointment is in the Palazzo Giustino Fortunato in Rionero in Vulture, in Piedmont at the San Sebastiano Monastery in Biella, in Campania in Procida in the Citadel of the Mysteries of the Borgo di Terra Murata and in the Palazzo d’Avalos, while in the Venue of Emilia is in Parma at the Monastery Library of the Benedictine Fathers in the San Giovanni Evangelista. In Puglia the event is held in the Swabian castle Sannicandro di Bari, in the Marche region at La Collina delle Fate in Fossombrone, in Liguria at Dolceacqua castle, in Sicily at Lauria castle in Castiglione di Sicilia, in Veneto in Tempio della Beata Maria Vergine del Soccor in Rovigo and in the Aosta Valley at the Grange of the Aymavilles Castle.
But there are also many museums that offer initiatives. In Calabria, the museum and the suggestive national archaeological park Scolacium in Borgia participate in “The Day”. In Sardinia, the Wine Museum in Berchidda, the National Archaeological Museum in Cagliari and the University Library in Sassari; in the Molise National Museum of the Paleolithic in Isernia and in the Umbria Museum of Wine and Oil in Torgiano. In Abruzzo initiatives at the Museum of the Birthplace of Gabriele d’Annunzio in Pescara, and in Emilia-Romagna at the National Museum in Ravenna, the National Etruscan Museum in Marzabotto and Pomposa Abbey and the Pomposian Museum in Codigoro. In Lazio at the Central Institute of Archeology and at the Museum of Civilization in Rome, in Lombardy at the fascinating Grotte di Catullo and at the Archaeological Museum in Sirmione, in the Marche at Rocca Roveresca in Senigallia and at the Arcevia State Archaeological Museum. In Campania at the Archaeological Museum of Ancient Capua and Mitreo of Santa Maria Capua Vetere and at the Galleria del Tempo in the Royal Palace of Naples, in Puglia at the National Archaeological Museum of Taranto, at the National Archaeological Museum “Giuseppe Andreassi” and at the Egnazia Archaeological Park of Fasano, and at the National Archaeological Museum of Altamura.
To implement the provisions of the new protocol, each within the framework of their own competencies, in parallel with AIS, for the Ministry of Education will be the Directorate-General for School Regulations, evaluation and internationalization of the national education system, for the Ministry of Culture the Directorate-General for Education, Research and Cultural Institutes and the Directorate-General for Museums, for the Ministry of Agriculture the Directorate-General for the Promotion of Food and Horse Racing Quality and the Department of the Central Inspectorate for Quality Assurance and Anti-Fraud of Agricultural Food (Icqrf).