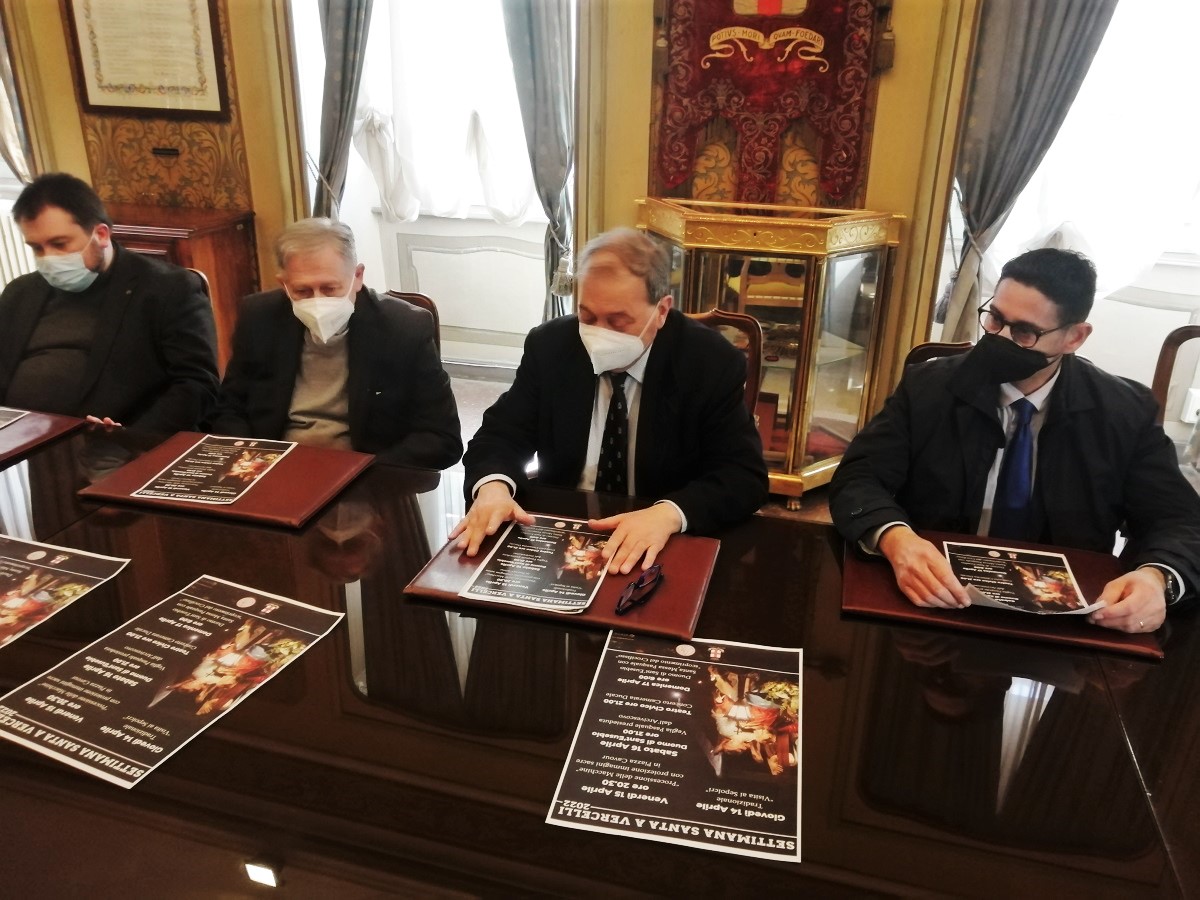 On Saturday 16 April in Civico there will also be an important concert of the Viotti Festival.

“Holy Week” returns to Vercelli as a cultural event after a two-year hiatus. Above all, the “Procession of the Machines” returns, which the people of Vercelli greatly missed in the two years of the pandemic.

The presentation in the town hall

“We come from a difficult period – emphasized Mayor Andrea Corsaro at the presentation of the events – and finally a city tradition is resumed. Councilor Domenico Sabatino also welcomed the “return to normalcy”, which joined the mayor in the recommendations for attention.

A concept that was also taken up by Monsignor Mario Allolio, the Archbishop’s Vicar General, who emphasized: “It was a challenge to restart after two years of stopping the tradition’s charm and historical-cultural proposals. We worked hard to define the path to the procession of Maccbine , for the respect of the sanitary norms and to avoid assemblies, therefore exclude the narrowest streets, with the use of Via Dumo.For this year we have also decided not to enter the Basilica of Sant’Andrea, with introductory sermon and conclusion, to be kept in the cemetery. The texts for the reflections on the stages of Christ’s passion have also been renewed. “of the Brotherhood of Transfiguration”,

A further novelty is represented by the musical repertoire, which has been handed over to the cathedral’s music chapel under the direction of Ms. Don Denis Silano, who in respect of the liturgical needs drew on the repertoire of the masters who preceded him, and suggested music from the sixteenth and seventeenth centuries, but also by contemporary writers. Another reason for cultural and historical interest.

Thursday, April 14 – Traditional “visit to the tombs” in the city churches, with decorated “altars for the conversion”.

Friday, April 15 at 8:30 p.m. – The procession of the machines starts from the cemetery of the Basilica of Sant’Andrea and follows the following path: via Guala Bicchieri, piazza S. Eusebio, piazza
D’Angennes, via the Duomo, via Gioberti, piazza Cavour, via G. Ferraris, to end at the Basilica of Sant’Andrea. An innovative path dictated by health needs, but which also has its own special proposal.

Saturday, April 16 at 9 p.m. at the Civic Theater, Grande Soirée at the Civic: Guido Rimonda conducted by Pier Carlo Orizio, with the participation of the Camerata Ducale Orchestra. It is the concert that was planned for March 26 last year, but which was then skipped. Camerata Ducale will perform a repertoire that is not strictly “sacred”, but with emotionally appropriate tones: F. Schubert, “Entract’e III from Rosamunda, Princess of Cyprus, L. van Beethoven,” Concerto in C major for violin WoO 5, PI Cajkovskij, “Sérenade Mélancolique op. 26”; M. Bruch, “Ave Maria op. 61”; and concluding again with Schubert, “Symphony No. 8 incomplete in B minor D 759”.

Sunday, April 17 at 6 p.m. – Cathedral of Sant’Eusebio Easter Mass with “unveiling
of the crucifix “.

The video pills from Holy Week

On the occasion of this long-awaited return to the city’s oldest traditions, the city of Vercelli, in collaboration with the Archdiocese, has produced a video project entitled Crucifixes: stories and rituals which will accompany the holy week. A documentary, in six sections, that tells the story of the crucifixes of the Vercelli churches and the Easter tradition with the unveiling of the crucifix. From this afternoon, every day at 17.00, they will be available on the youtube channel, on the Facebook page and on Instagram Città di Vercelli.

The short pills are introduced by Monsignor Marco Arnolfo with the conclusion of Mayor Andrea Corsaro. Last appointment Monday Easter, where the documentary will be broadcast in full version.