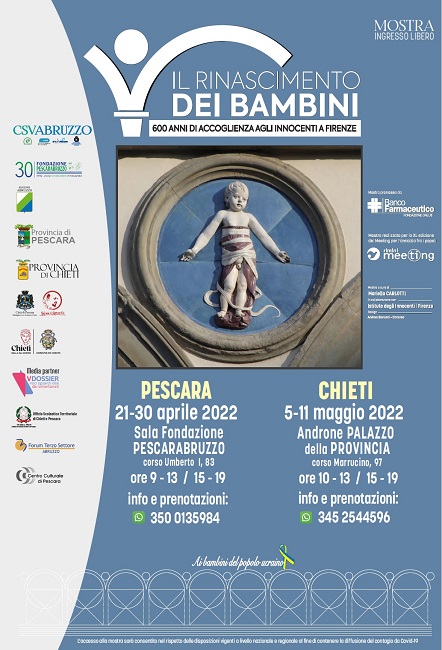 The exhibition will remain on display in the province’s entrance, at Corso Marrucino 97, until 10 May. There is free admission

CHIETI – The exhibition Children’s renaissancecreated by the Banco Farmaceutico Foundation for the Rimini meeting 2019, edited by Mariella Carlottiarriving in the region thanks to CSV Abruzzo (Voluntary Service Center) to complete the project path “School and Volunteer Service” with dignity. After ten days in Pescara, where it – at the headquarters of the PescarAbruzzo Foundation – was admired by six hundred people, there is today (May 5) inauguration in Chieti, at the entrance to the province, in corso Marrucino, 97, where the exhibition will continue to be shown until May 10. There is free admission.

The “Initiative”have explained Casto Di BonaventuraPresident of the CSV Abruzzo, «Coming to the end of a project concerning colleges: School and Volunteering. In Pescara the title was “I, you, Volunteers” and in Chieti “What turns me around”. At the end of these projects, there is a meeting time, which we try to bring students closer to the world of volunteering and in particular to building the common good. The exhibition represents this last minute ».

“Chieti has a long history in terms of the themes of welcoming childrenhe adds Ermanno Di Bonaventuracoordinator of the Chieti delegation from CSV Abruzzo, “Casa dei Cappuccini, for example, became part of this circuit before the unification of Italy, and there are six other similar structures. So it is important and right that our city is one of the places where this exhibition is to be hosted. Moreover, the current period seems to me to be the ideal time to reflect on the concept of solidarity ».

The inauguration ceremony was attended by i.a. Sandra De Thomasis, Responsible for the promotion of CSV Abruzzo; Lorenzo Di Flamminiocoordinator of the Pescara delegation from CSV Abruzzo; Anna Musciano, responsible for relations with schools; the boys in the civil service.

32 panels tell the centuries-old story that began in 1400 and is still active today: a welcoming experience. This is the way in which a society through the donation of the rich merchant Francesco Datini (in the following decades integrated by Silk Corporation in Florence) transformed this society into a real people. Over the course of its history, the hospital has received 500,000 children.

A symphony of charity, art, culture and education that still takes care of the little ones. Spedale, today, called the Istituto degli Innocenti, houses a Unicef ​​research office, family home and education services and manages the functions of the National Center for Documentation and Analysis for Childhood and Adolescence.

Through didactic panels, the exhibition is divided into 3 sections:

There first, tells the creation of the Institute, the key figures for the realization of the work and the basic stages that have expanded and transformed the building in the 600 years of history.

There other it focuses on life in the hospital and the stories of some children who were received over time.

There third, through the precious works of art commissioned by the institutions and donated by the many benefactors through the centuries to the Institute, he elaborates on the close connection between beauty and charity.