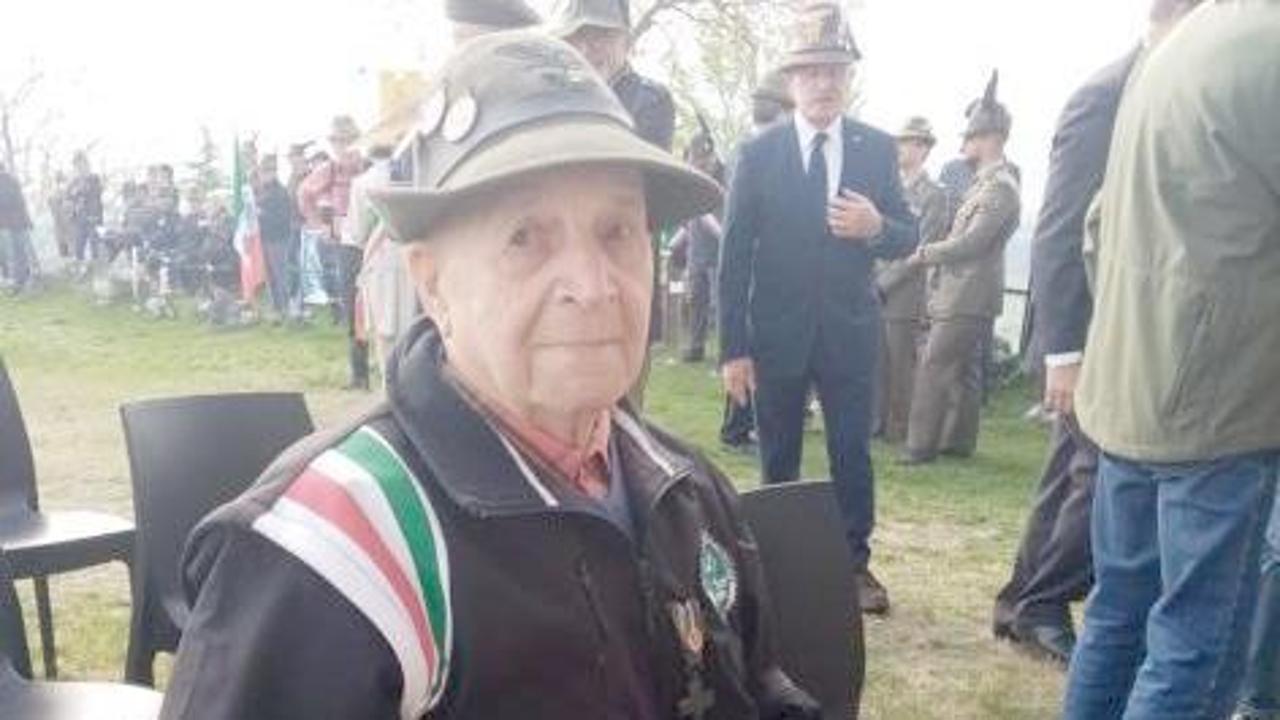 “I do not know. I tell you honestly: I do not know how I managed to save myself. I could have died at least a hundred times. And on more than one occasion I have asked for a bullet to hit me, to get out of hell. Forty degrees below zero, hands and feet frozen, officers shouting “drop your weapons and run”, we walk over thousands and thousands of dead in the snow. They fell down in front of you, destroyed by hunger, cold and “fatigue” and you could not stop to help them. Only those who have been there can understand, only those who have lived can believe it. “Giuseppe Falco, 101 years old, originally from Caraglio, long lived in Alba and long resident in San Rocco Castagnaretta di Cuneo, is one of the last two veterans of Russia (the other is Mario Boarino di Bra) enrolled in the alpine section of Cuneo.

On Sunday, he took part in the first national pilgrimage to the sanctuary of Madonna degli Alpini, on the hill of San Maurizio, on the border between Cervasca and Vignolo. A church surrounded by memorial crosses, a reference point for the families of young people who died and were missing during the tragic withdrawal from Russia, inaugurated on December 10, 1961 in memory of the more than 15,000 fallen by the Cuneense Alpine Division on the Soviet front.

Hundreds of “black feathers” arriving from all over Granda and outside the region welcomed national representatives, civilian and military authorities to the arrival of the Alpine pilgrim columns, the one of the Stura Valley that left Pietraporzio on Thursday, and the of Cuneo, which reached the memorial from the Cesare Battisti barracks in Cuneo. On the notes of the Filarmonica di Caraglio directed by Andrea Aimar, banners, banners and pennants paraded in tribute to Cippo ai Caduti, then the interventions of the section president Luciano Davico, the commander of the 2nd Alpine Regiment in San Rocco Castagnaretta, Colonel Giuseppe Sgueglia, by the mayors Bernardi (Vignolo) and Enzo Garnerone (Cervasca), focused on the duty to remember and the alpine values ​​of solidarity, brotherhood, friendship, peace among men. In front of the altar in the cemetery, in the front row, while we wait for the mass held by the military pastor Don Mauro Capello, the veteran Falco, a piece of living story that shook hands, gave smiles, advice and a lot of wisdom in a short but moving and intense talk .

“I left Busca by train in July 1942 with the Dronero Battalion. At the front there was a distance of 100 meters between us and the Russians, sometimes you even heard them talking – he said excitedly -. I never fired or killed. ‘ The hands of his face in despair as he thinks of retiring. The Germans were terrible, cruel, they set fire to the houses, we “Italianski karasci” (Italians good people, Russian expression refers to the many episodes of solidarity with our soldiers, ed.). I went 46 days in the snowstorm and without food was found nothing.I ate the snow, a few dry and bald sunflowers.I lost 14 kilos, arrived at the border I was skin and bones.We have it done in a couple, I have seen many friends die. Some fainted because they were exhausted, crushed by thought: they passed over it, and there was a stain of blood left ».

The arrival at the border, the military hospital and the visit of a brother who is a chef. “He brought me two loaves and a flask of white wine. I ate half a loaf of bread and fainted from weakness. I woke up, I think, the next day.” After the war, Falco worked as a worker between Caraglio and Alba and also found love and a family. On June 24, 2021, for the 100th anniversary, it was celebrated in the barracks at Cuneo Alpini. Despite his age, he stays up to date. “War in Ukraine? Scary, we have to stop, work for peace ‘. The last message is a life lesson: “For many years I went to school to talk about that tragedy, but I have always been ignorant. To young people I say study, get information, for those who have a good education do not let themselves be deceived by those who command them. And in the face of injustice, he finds the courage to rebel. ‘