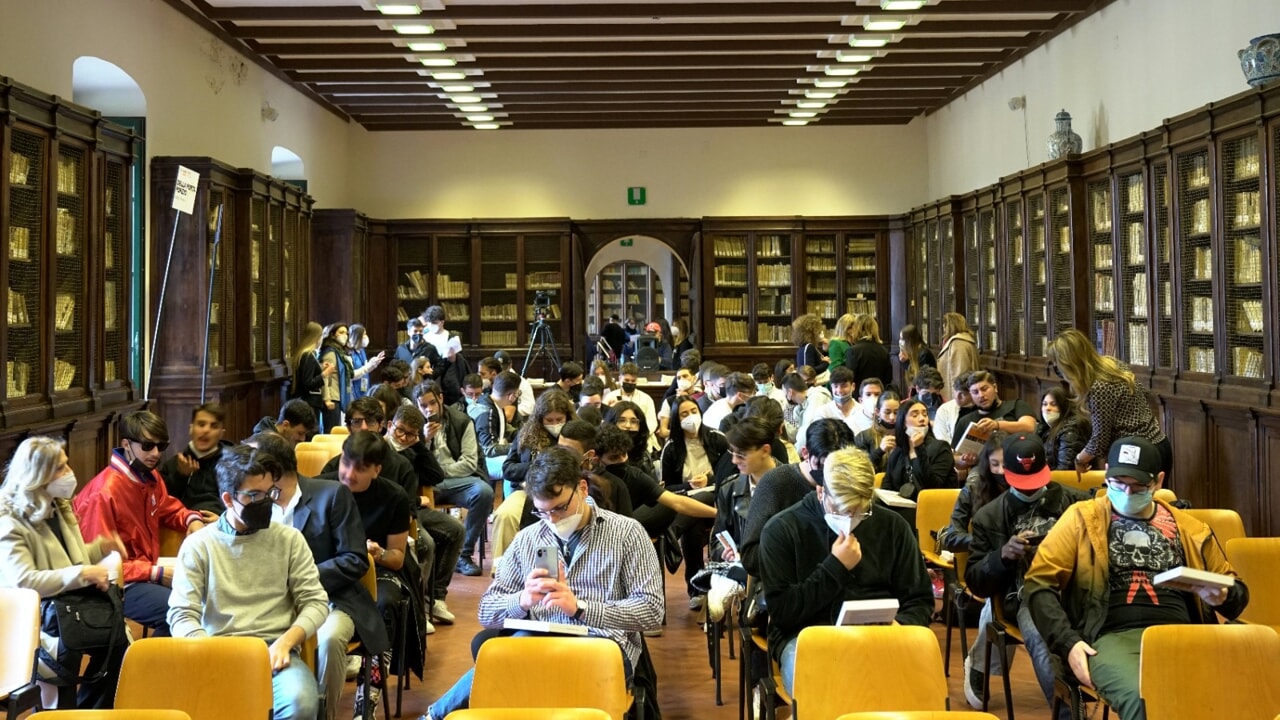 Last week on Maschio Angioino the third route of The ideal city … seen by the children: ethics, culture and tourism, an important initiative conceived by APS Euforika Napoli and carried out in collaboration with the Aniello Raucci Foundation onlus.

The students of four institutes of excellence, “A. Serra” – “G. Fortunato” – “Porzio-Della Porta” – “A. Casanova”, presented their project to Deputy Mayor Maria Filippone, to Tourism Councilor Teresa Armato, to Youth Policy Councilor Chiara Marciani, to the Chairman of the Council Commission on Culture and Tourism Luigi Carbone, to Fabrizio Perrella, delegate to the Director of the Regional School Office Ettore Acerra, to the philosopher Nino Daniele and to the author Yvonne Carbonaro.

The journey to the ideal city … seen by children aims to promote cultural tourism with an idea of ​​improving the monuments and history of Naples in a modern perspective.

The fourth and fifth grades of tourist, graphic, hotel and technician addresses were immersed in a fascinating and innovative path by the experts from Euphoria Naples to develop with the teachers a project with strong ethical, cultural, social and communicative: the modern museum for ancient Neapolitan cuisine, in one of the magical places of our city, Castel dell’Ovo.

The students’ journey opened by meeting the potential client and his experts, who illustrated the idea and clarified the needs.

Then the discovery of the castle, a dive into the antiquity among the remains of the Roman general Lucullus’ pleasure villa, into the cells of what was once a state prison, into the large outdoor spaces overlooking the sea and into the old rooms of the medieval castle. A blast from the past, walk through the narrow streets of the castle in a perfect fusion of myth, history and legend. Some young people became interpreters and protagonists, and dramatically dramatized prominent scenes in the engaging story of the experts from Euphoria Naples.

After gaining awareness of the significance and significance of the site, they began working on the design of the museum in the castle. The experts provided input, accurately illustrating the current state of the sites and the possible solutions for creating the museum: they paved the way for children to work with imagination and creativity and provide practical insights, with precious testimonies as well as with their skills.

Although Covid with restrictions related to it and the accidents along the way have not been lacking, these circumstances have not hindered the path, but have favored the students’ ability to understand the complexity of the difficult reality outside the school walls, identification of its critical and special circumstances: with great responsibility, the students have adapted to the course changes, which are not always easy. The willingness to go all the way in solidarity and cooperation has united student-tutors-experts who characterize the path of cooperation.

Communication, transmission, sharing: three basic elements to realize this idea and arouse the interest of young people, the souls of the city, young citizens who are not aware of their future, but precious guardians of the beauty of their city.

The journey has come to an end: the main characters have put their heart into working in full synergy to achieve the result that we hope will be interesting for the city’s institutions and above all the beginning in a new way to involve future generations in cultural heritage management. A new way of running a school, living out the subject being studied, intensively going into it with activities aimed at producing concrete and achievable ideas.

The hope is that this can increase the moral dimension of children, give rise to the need to live and adopt a behavior that respects the artistic heritage, to discover the bourgeois sense, the pride of the citizens and the sense of belonging and of the city and its Historical Heritage develop their relational skills to design the city’s organization in a broad vision.

Eventually, the enthusiasm infected other classes at the schools involved, and other students were asked to take an active part in the organization of the closing meeting, and here, by magic, the young hostesses materialize in uniform and welcome their companions and guests, young chefs. tasty 17th-century Neapolitan dishes, young Maître di Sala and Steward in paint, creating the atmosphere of the museum’s baroque hall: a counter lit by stylish candlesticks, set up with period dishes and suggestive decorations …