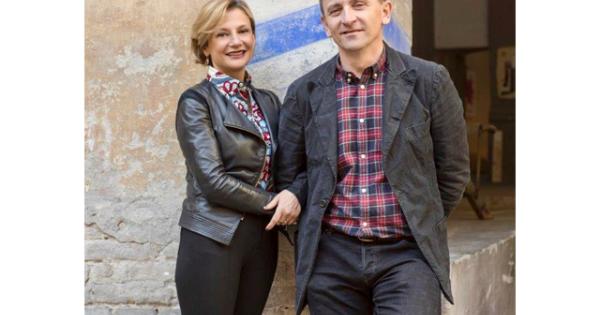 In the heart of the historic center, in an artfully restored old space, the BDC catalog has taken root. Lucia Bonanni and Mauro Del Rio the founders and souls who make it live as a cultural center and meeting place through events aimed at all citizens.

What is BDC and why is it called that?
«BDC stands for Bonanni Del Rio Catalog, but also a bit for Borgo delle Colonne. BDC is the entity through which we manage our business in contemporary art. So both our collection and the things that are happening in our headquarters, the deviant church in Borgo delle Colonne ».

Why “Catalog”?
“Because we like to keep order in what we do; for this reason, we indicate with a progressive number the events we organize: exhibitions, concerts, meetings with artists and more, thus forming a “catalog” of things that happen. In addition, calling us the Bonanni Del Rio Catalog has allowed us to play on words between the Bonanni Del Rio Catalog and the Borgo delle Colonne ».

What is the history of BDC?
“We acquired the church almost by accident, attending a bankruptcy auction that went awry 6 years ago; at that time the church was in a state of neglect. Even the Borgo delle Colonne area did not do very well, both from a commercial and public point of view. After the first urgent works, we immediately started hosting art exhibitions, collaborating with the “neighbors” and with different realities and city institutions to make them participatory and open. We immediately gained an excellent interest, which gave life to the area, revitalized the activities already present and encouraged others to open new ones ».

The activity starts again in a completely renovated space designed to be increasingly inviting. What has changed in recent months?
“In the last two years I play, we have had to limit public activities; we took advantage of this time to equip the whole church with underfloor heating, which allows us to use it for any kind of event in a comfortable way all year round. We have improved the technological equipment of the room with an avant-garde audio / video system. We have also improved access systems, making the church more spacious, secure and welcoming as well as barrier-free. Above all, we have added a side room, next to the church, which can also function independently as a café. This is done in collaboration with Santeria, a Milanese artistic / cultural reality that will allow us to improve and expand the offer of BDC ».

You have thought of BDC as a center for cultural activities, not just as an exhibition space. It is no coincidence that there are also numerous musical events. Want to do more with Santeria?
“We have always thought of musical events as a complement and attached to the works of art that were exhibited at that time; with Santeria, we expect to work more on quality than quantity. What we intend to do with Santeria is, above all, to expand the type of activities that can take place in BDC. To bring an offer of pop cultures that are not so present in the city. Also mixes language and situations: in recent months we have been experimenting with the combination of photographic exhibitions with vintage markets, in collaboration with Remira Market, one of the most interesting Italian companies in this field ».

A space that is often also dedicated to the presentation of books. The last in the agenda was the meeting with the last of De Giovanni. Do you also intend to continue on this path?
“Of course; the space, especially after the recent interventions, is suitable for different types of meetings; there will be book and record presentations. But also evenings with stand up comedy, poetry, jazz. We are also preparing with Santeria a number of meetings with the main candidates to the next local elections, which we plan to provide an alternative cut, to get to know not only the proposed political programs, but also the people who incarnate them.The exhibition is entitled “The Mayor of the Future” ».

From the beginning, you have imagined this space as a place dedicated to cultural initiatives, based on your great passion as a photo collector. What are your favorite artists?
“We started collecting photographic works about twenty years ago; as often happens, we made our first purchase of passion, based on our tastes, to make our homes and the spaces where we lived more comfortable. Our first artists were Ghirri (our first work ever was his “Scandiano”) and Giacomelli, for the poetry that emerges from their landscapes. Our collection of photographs therefore began with the great masters of Italian photography (besides Ghirri and Giacomelli, Barbieri, Mulas, Berengo Gardin, Jodice, Basilico, Miglior, Fontana …). We then combined the passion for photography with the passion for music: from the four photographs by Luigi Ghirri, which is the cover of Etica, Epica, Etnica, Pathos by CCCP, we bought many other album covers, both Italian and international. “
So with the expansion of the collection …
“It has become necessary to follow some tendencies not to be too distracting, as in our case, in addition to the aforementioned great Italian classics and record covers: well-known faces of the twentieth century captured by the action lenses photographers from Rome in Dolce Vita and New York in the 1980s and historical documents about the discovery of space, later we also expanded our interests to street art and illustration and more recently to installations and performances, especially since we have led BDC28, we often work directly with both Italian and international artists and produces new art ».
What are the big names you have brought to Parma so far?
“Many. Among the photographers we remember Sottsass, with his Metaphors, photographs taken during his travels in the 70s, in which all his initial research in light and space appears, Tina Modotti, with 80 images illustrating a Mexico rich in artistic fermentation and social events during the 20s of last century, Efrem Raimondi with his portraits of La Famiglia, Franco Fontana, who portrays a glorious Route 66 in his decadence, Gianfranco Gorgoni, who documents American country art, and then the group shows: La Scelta Italiana , our collection of masters of Italian photography, exhibited at Mercanteinfiera in 2018, BDC – Records, with our photographs of Italian and international vinyl covers, Paparazzi, with pictures of the Roman Dolce Vita and of New York in the 70s and 80s, and NASA photographs taken during the Apollo missions, which coincided with the fiftieth anniversary of the first lunar landing, and then included street artists and illustrators: Ozmo, Baronciani, Reg Mombassa, the work by Enrico Fontanelli and many young Parma artists, for example, we worked a lot with Alessandro Canu. And musicians: Lorenzo Senni, Vasco Brondi, Fatoumata Diawara, IOSONOUNCANE, C’Mon Tigre, Nico Vascellari, Dave Haslam, Massimo Zamboni, the artists from Barezzi Festival and Verdi Off ».

Which ones are you planning to introduce to the city?
“We have for some time felt the need to support the great classic photographers who form the core of our collection, new photographers, artists who carry out their work in recent years, who have characteristics of quality, originality and authority such as For this we have activated a collaboration with the MIA Photo Fair in Milan and established an award, which we have called The NEW Italian Choice, as every year, with the advice of an authoritative board of experts and professionals, select three photographers to be included in our “hall of fame.” This year’s winners are Silvia Camporesi, Luca Gilli and Francesco Jodice, artists who outline the versatility of today’s photographic expression and are, in our opinion, among the most representative and relevant to the unstoppable creative fermentation that continues to reinvent form, language and content in the use of the image.
In the autumn of 2022, we will perform three solo exhibitions of these three main characters in today’s photography ».

Why are you doing this?
“None of us are originally from Parma (Lucia is from Bologna, Mauro is from the province of Reggio); but it is our adopted city where our family and professional life grew up. It seemed natural for us to give this form, which also seems interesting and lucrative for the city, for our passion as art collectors’.