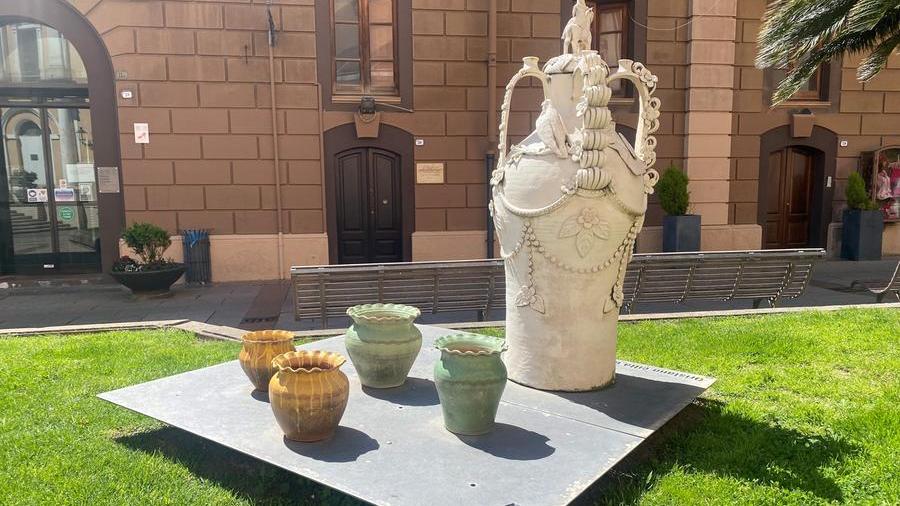 In the past, they were everyday items such as crockery, bowls, plates and jugs. Today, they are mainly creations of artistic craftsmanship. Various uses of this “terra cotta”, which is still one of the riches of Oristano, one of the 46 cities that join Aicc, the Italian association Città della Ceramica, created to promote the traditional art of Figoli.

An art that in the city of Eleonora d’Arborea has its roots in the Neolithic and evidence of precious archaeological finds from the fourth millennium BC. The production, export and exchange of artifacts flourished even in the Middle Ages and the Renaissance. Not only that: in the town there were even “the village of figoli”, the ceramic craftsmen, gathered in a gremio (trade association), as it appears from the papers of the fifteenth century. This is the only case in Sardinia of a village dedicated to the acquired figoli, an element that further highlights the primacy that Oristano enjoyed in the art of ceramics. The old craft continues today with valuable craft productions. Several workshops are active in the town and in the surrounding villages: they suggest motifs typical of Sardinian craftsmanship, but above all from the tradition of the Oristano figures, on which original elaborations and research into new trends are grafted.

Since 2003, Oristano has been part of the Italian Association of Ceramics City, which has established a network of municipalities with ancient and significant traditionsone to strengthen and spread the mutual artistic, craft, economic and productive heritage. Every year, the event “Il latio di via Figoli” is held, a festival of ceramics, a market exhibition that receives recognition every time. In addition, the city participates with the artisans in Buongiorno ceramica, a national event planned this year for the next 21 and 22 May, in which the other Aicc cities also participate.

Between the land of Giudicessa Eleonora and one of the centers belonging to the association, there is an even more special bond as revealed by Gió Murru, a scholar from Oristano, who recently focused precisely on this important form of artistic craft. “Oristano and Castelli are separated by the sea, the mountains and hundreds of kilometers of roads. But they are greased by the art of ceramics: a bond that was born in the 1940s and strengthened in the following decades.” Gió Murru examined the connections between the island and central Italy with careful research, published by the magazine “Faenza”, the semester of Mic, the International Museum of Ceramics of Faenza, which houses the largest collection of ceramic art in the world (both Mic and the magazine are directed by Claudia Casali).

The Oristano researcher’s research is based on the very rich documentation preserved by Oristano’s municipal historical archive. Especially the documents concerning Vincenzo Urbani, a native of Isola del Gran Sasso in Italy but who grew up in Castelli. Artist and middle school teacher who moved to Oristano in the 1940s and gave birth to an important ceramics school, thanks to support from the Workers’ Mutual Aid Association and the municipal administration. The school was active, with mixed success, until the mid-1960s. Urbani brought a new awareness to Oristano, along with the typical colors of the Abruzzo tradition and a strong entrepreneurial approach. And it was then that the awareness that with ceramics it was also possible to create interior accessories such as tiles.

In the early sixties, the artistic institute began to take shape in what is today the artistic high school “Carlo Contini”, a prestigious educational school for young potters and an important research and innovation center. It was directed until 1969 by Arrigo Visani, a bolognese artist who grew up artistically in Faenza (one of the most prestigious ceramic artists of the 20th century) and who worked for years in Castelli, so dear to Vincenzo Urbani. And here are the contacts, the pollution between one school of ceramics and another, from the island to central Italy and vice versa, thanks to the artistic vitality of the masters.

The research published by Giò Murru is part of a more complex work starting in the 1920s, with the experience of the applied art school born in Oristano at the instigation of Francesco Ciusa. A reality that Carlo Contini had also collaborated with, which in turn frequented the premises of the Urbani school and later became a teacher at the art institute led by Visani.